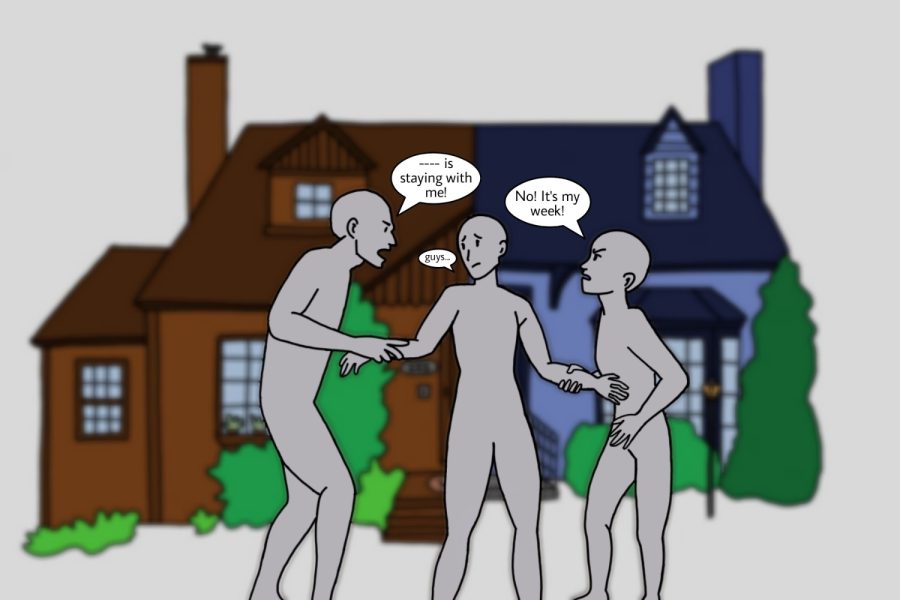 Some parents fight for custody of their kids, often resulting in the children switching between houses, making it inconvenient for them.

You came home after a long day at school, and your parents sat you down for a chat.

“We’re getting a divorce,” said your mom.

Even a couple of years later, you still haven’t fully gotten used to switching between houses.

This is something that many students experience since almost 40% of marriages end in divorce. Students often have to switch between houses because of this split, which can be tiring and inconvenient. Depending on the arrangement decided by the family, students might change houses every week, on weekends, or every day.

“I change houses every week, so not too much stuff in my room is permanent. So it’s kind of weird and I just pack a bag every week,” said Nicholas Tolod, a sophomore.

For some students, such as sophomore Grayson Winghart, switching houses can be pretty hectic as they have to bring their belongings to school. Winghart’s weekly routine was difficult at first, but she has now adapted to it.

“I bring everything back and forth through school. I start with everything I need from dad’s, go to school, [and then] go to mom’s after school,” Winghart said.

Not having a permanent home is the biggest hassle that Carlmont students with divorced parents experience.

“The biggest struggle is probably that I have to go back and forth between houses,” Charlotte Lin, a sophomore, said.

“Switching between houses and getting used to the new schedule was the hardest part, to be honest,” Winghart said.

“[When] Switching back and forth each week, just managing having everything in my bag and not forgetting anything else is a big struggle for me,” Tolod said.

Many parents find new partners and remarry after their divorce. This often leads to students getting stepsiblings, which can be another struggle, or a blessing in disguise.

“Both my parents have found new partners after the divorce and I’m happy for both of them.” Lin said, “I have a stepbrother now, who is two years old, after my dad remarried and I’m very grateful for him.”

Some parents might divorce again after remarrying, which was the case for senior Anna Burford, who went through more than one divorce.

“My parents [first] got divorced when I was two so I don’t remember it, but both my parents have remarried and divorced [since then],” Burford said.

While divorce may seem like a tragic thing for many people, there are also some positive outcomes. Some parents divorce because they’re no longer happy together, so remarrying or simply separating is necessary to solve this problem.

“As people, they’re definitely happier which is good,” Tolod said.

While the parents might be happier, there are still some effects on the children’s mental health. According to a GenPsych study, children with divorced parents experience higher levels of depression, anxiety, and may also be more antisocial.

On the other side, some children’s mental health isn’t affected much by their parents’ divorce.

“My mental health has been fine even with my parents’ divorce,” Lin said.

Parents can divorce at any point in their marriage, sometimes this is when their child is four, like Lin, or eight, like Winghart. Other times it’s even later. The younger the child is, the less they’ll understand, but it affects them either way.

“I was too young to really experience any strong emotions of my parents getting divorced,” Lin said, “I think I was just confused why both my parents weren’t together and why I only saw one of them at a time.”

Some children don’t comprehend what happened until they are older.

“I was five so I didn’t really understand what was happening, but later in life I sometimes get sad about it or [think] this is just insanely inconvenient,” Tolod said.

Divorce can be a tragic event that affects the everyday life of a child, but when a couple is no longer happy, it is necessary.

“I was, of course, sad, but knew it would be for the best,” Winghart said.