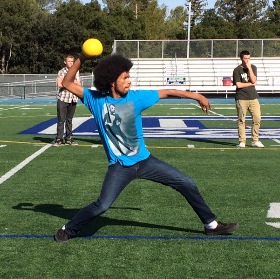 For the next few weeks, a common schoolyard activity, dodgeball, is being played on the football field as Carlmont’s Associated Student Body works to bring the nostalgic thoughts of elementary recess back into high school life.

“I had this dream of bringing back recess. It was always the greatest part of the day,” said Jim Kelly, ASB teacher.

This year’s tournament, which started Nov. 12, contains 19 teams with a total of 175 students. That is the largest participation during the dodgeball tournament than ever before at Carlmont.

“Almost 200 students signed up this year. To me, that’s the real sign of success. That’s all I need,” said Kelly.

Not only is the dodgeball tournament a way for ASB to recreate the joy of recess, but according to Lukas Kelly, Lunchtime Activities Coordinator, this event is used to bring the school together.

“It gives people something to enjoy at lunch, whether they are playing or spectating. Even if people are not in the tournament or are not playing that day, it is an extremely exciting and hilarious game to watch,” said Lukas Kelly.

In the first several rounds, teams will compete for the best two out of three games to determine who moves on in the brackets. Even when teams are eliminated, it will not be the end of some students’ dodgeball careers.

Junior Fernando Cebreros said he would compete again next year if given an opportunity. “It’s a lot of fun. I couldn’t turn down dodgeball,” said Cebreros.

Although teams may participate for the hope of victory, they are able to meet ASB’s goal no matter the outcome.

“Some teams you can tell have never played dodgeball before, but it’s just great to expose students to structured recreational activities,” said Kelly.

The dodgeball tournament is seeing its biggest turnout this year, but this event has been active since the production of the movie “Dodgeball: A True Underdog Story” in 2004.

According to Kelly, there is no dominant reason as to why Carlmont’s participation has risen this year, but there are several plausible causes.

“The Carlmont Cup also saw about 20 teams this year. The student body may just be more spirited this year, or larger in size. ASB also promoted better this year, but I am just glad to see the outcome,” said Kelly.