Dogs and kids form ‘pawsitive’ bond through Paws for Tales 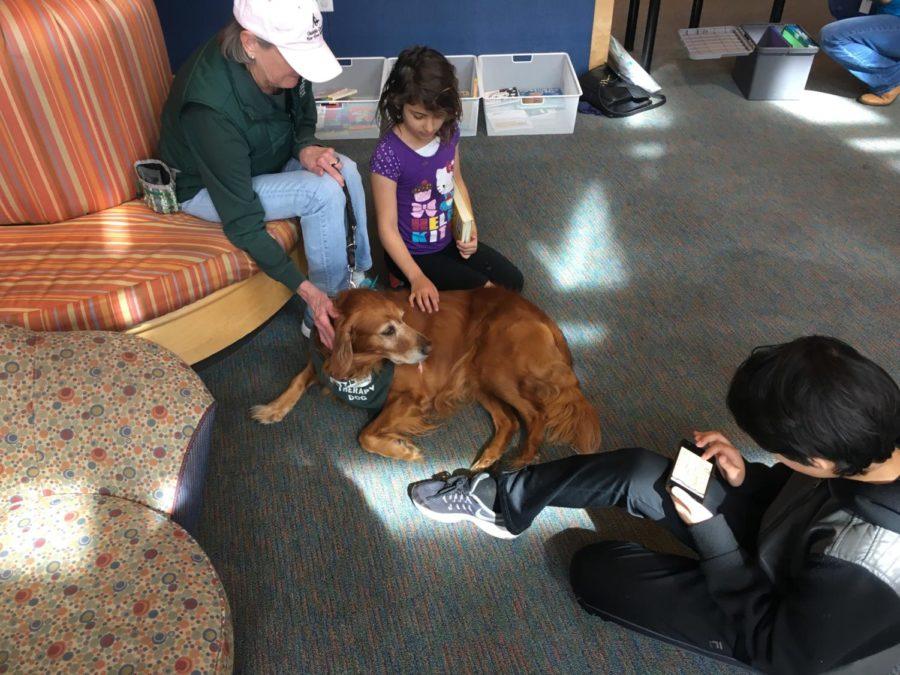 Golden retriever Marianna listens to Rohan Sainani read her a chapter from his favorite book.

On a rainy day at the Redwood Shores library, Marianna the golden retriever wags her tail happily as a little girl reads “Diary of a Wimpy Kid” to her.

Marianna is part of Paws for Tales, a joint effort by the Peninsula Humane Society & SPCA and the Peninsula Library System that allows children to form bonds with dogs by reading books out loud.

“The Peninsula Humane Society does this to encourage reading and foster interaction with dogs,” volunteer Melissa Smith said. “It’s a good outreach program for the community.”

Marianna had been raised to be a guide dog. However, due to her friendly personality, she was taken out of her training and adopted by her handler, Madeleine Palacin.

“She’s not a guide dog, so she doesn’t have clearance for everything. We can really only go to places where we’re invited,” Palacin said.

Despite not being a government-certified guide dog, Marianna is still able to comfort people through the Peninsula Humane Society.

“We can go out in public and she can bring joy to people,” Palacin said. “We come to the Redwood Shores Library the first Saturday of each month.”

Paws for Tales helps children who are learning to read by giving them the chance them to read to a friendly face.

“For kids that are shy and struggle with reading, they like to read to dogs,” Palacin said. “We go to a library in Palo Alto and the parents aren’t allowed to inhibit the kids while they’re reading.”

Kids who don’t have everyday experience with dogs have a chance to meet them and become comfortable around them. The children see the library as a safe place, and the books provide a familiar tool to help them connect with the dogs.

“We don’t have a dog and I wanted my kids to get some friendly exposure to pets,” Molly Montrois, a parent, said. “Dogs are really friendly creatures and it’s good to have positive pet interactions, instead of sometimes when dogs are on the street and they are a little more hyper.”

Becoming confident while reading around dogs at a young age can give kids a chance develop a confidence in other areas later in life.

“There’s a sense of comfort in being able to reach out to a dog, and I hope that leads them into the rest of their lives where they find that confidence to speak in public,” Smith said. “It can be a thing that everybody’s a little bit shy about and I think this is a great way to overcome that.”

The children light up when they talk about their furry friends.

“Dogs are cute,” Rohan Sainani said. “I go to art class once a week and my art teacher has two dogs.”

If kids are scared of animals, the dogs at Paws for Tales allow an easy way to get accustomed.

This event was also beneficial to children such as Anika Sainani, who wants to be a veterinarian when she grows up. Upon being asked what her favorite animals were, she responded, “Dogs.”

“I think it’s great for kids to be interested in books and I think this is a great way to do it,” Smith said. “Who doesn’t like being with dogs?”

If you would like to participate in Paws for Tales, they meet every first Saturday at 11 a.m. at the Redwood Shores Library.