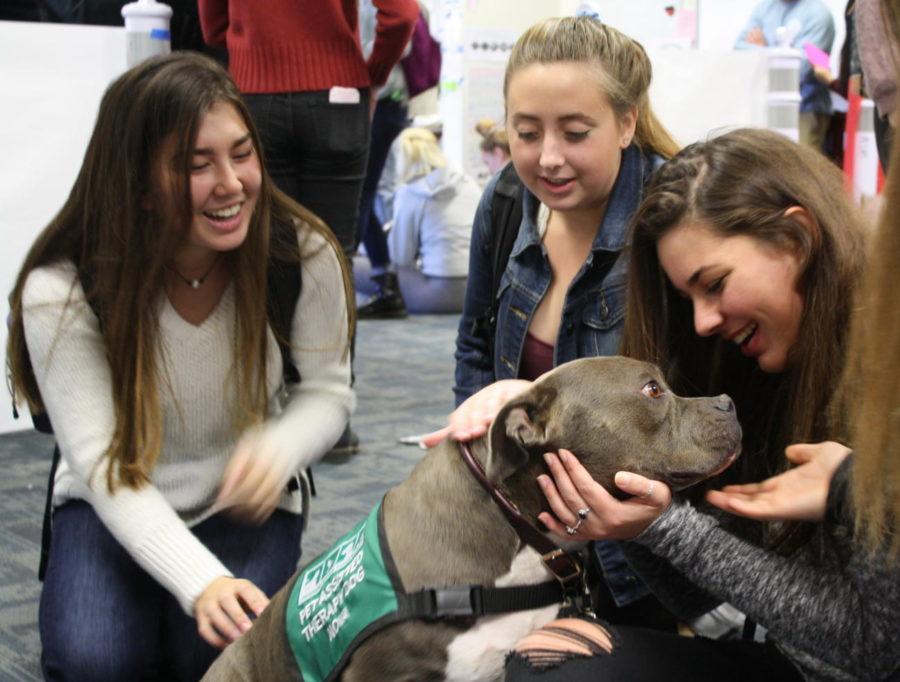 Manon Llorach, Emma Simmons, and Nicole Turk, three juniors, smile as they pet Nova, one of the therapy dogs.

For some students, lunchtime on Dec. 11 was different than any other school day this year.

Students filed outside the ASB room, waiting to take their turn to pet dogs.

The event commonly known as Dogs in the Quad is put on by the Human Relations Commission in ASB almost every year. Therapy dogs from the Peninsula Humane Society are brought onto campus; the aim is to decrease student stress as the weeks near final exams.

The two therapy dogs, Nova and Pepper, both calmly sat with students as they filtered in and out of the petting area.

“The idea originally stemmed from the fact that we needed some type of stress awareness on campus, and we thought finals week was the perfect time to hold an anti-stress event. As for how we get [Peninsula Humane Society] to come, they actually already have therapy dog teams that are trained and willing to come and help out here,” senior and supervisor of Human Relations Jade Sebti said.

Barbara Suroz is the owner of Nova.

“Nova is a six-year-old pit bull-bulldog mix. She’s a very sweet dog, so I felt she had a solid temperament to go through the Assisted Therapy dog program with the Peninsula Humane Society. Because of that, we were asked to be here for stressed-out students,” Suroz said.

For freshman Carolyn Wang, it was her first time attending a school event with animals.

“[Nicole Klein and I] went to Dogs in the Quad because we were interested as to why they were there. It was really cool because in middle school we didn’t have events like these,” Wang said.

Timmy Palthe, a senior, found that the event provided him a break during dead week, the week before final exams.

“[Dogs in the Quad] gave me a much-needed distraction from dead week, as I’ve been stressing about all the things I have to study and finish. It didn’t last very long, but the people there were super nice, and it was just cool to relax and pet some dogs,” said Palthe.