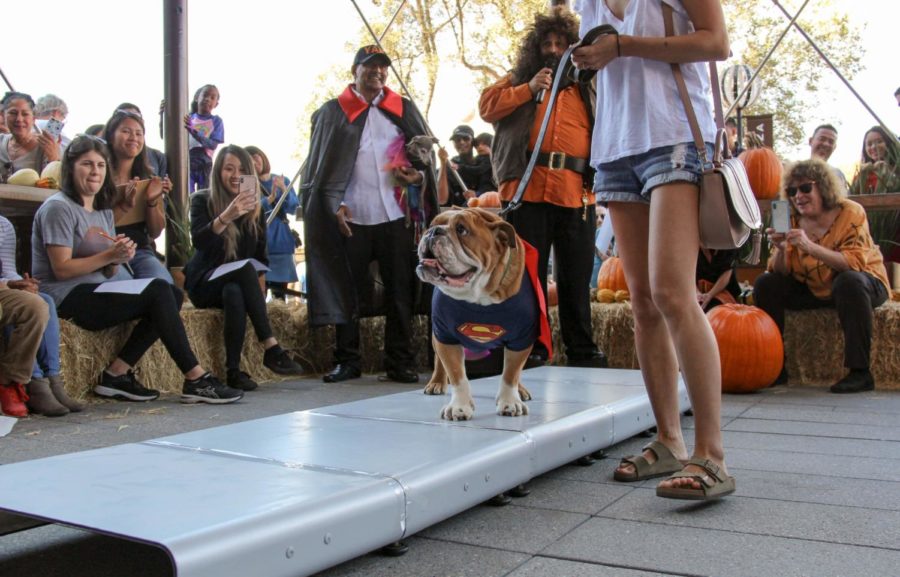 A dog dressed as Superman walks the catwalk for YAP'S halloween costume contest.

Ears up, tails wagging, and costumes on.

That’s one small step for dog, one giant leap for dog-kind.

Or at least it was to the crowd that had gathered at Ghirardelli Square to witness YAP’s first Halloween Dog Costume Contest on Oct. 26.

YAP is the oldest store in Ghirardelli Square beside the Ghirardelli store itself. They are an independent business dedicated to creating products that cater to the safety of pets and their owners. However, YAP’s goal at the costume contest was far from designing a new leash or harness.

According to Liy Cath, YAP’S product designer, the contest served as a way to get San Francisco residents and pets to come together and enjoy the Halloween festivities.

“We can all be serious. That’s kind of boring. So we think it should be fun. People can get out, and it’s just a nice day to hang out,” Cath said. “It’s a social thing. It’s got nothing to do with dog wear.”

Along with YAP’S dog costume contest, Ghirardelli also hosted a Trick or Treat event, which brought in a large array of kids and families dressed in costumes. Surrounded by a bustling crowd, dogs of all breed and costume prepared for their time on the catwalk.

“It was really cool just to see all the types of breeds that showed up and dogs of all sizes,” said Molly Good, owner of the second-place winner, Dinky. “And I think there were a lot of people around who didn’t even have dogs with them.”

Dog or no dog, many of the attendants felt like the contest was a great way to get together, showcase — or fall in love with — of the adorable pets, and celebrate Halloween. For Chandini Davis and her family, YAP’S costume contest also provided a way for her to reconnect with the San Francisco community while enjoying all of the festivities.

“I grew up in Fisherman’s Wharf, and I used to come here since I was like 5 years old or younger, so we like to still be part of the Wharf community and the larger communities in San Francisco,” Davis said, a proud owner of a rescue dog, Dallas St. James.

Reconnecting with the roots of Davis’s hometown and becoming more involved in the community was one of the many reasons people joined in. For Glen Micheletti, emcee and magician at the event, it was more of a fun activity than a job he was being paid for.

It was fun for people to watch other people’s dogs wear costumes and to see what people would dress their dogs as,” Micheletti said, who was dressed up as Hagrid from J.K. Rowling’s “Harry Potter.”

Overall, the costume contest and Trick or Treat event was a success, according to attendants, and many of them said that they would come again next year. For now, though, many attendants were excited to get their face painted, take photos in the photo booth, and enjoy the festive atmosphere.

“I didn’t know there was a whole other event going on all around, so I’m glad we showed up because now we’re going to hang out and have lunch and make a day out of it,” Good said.