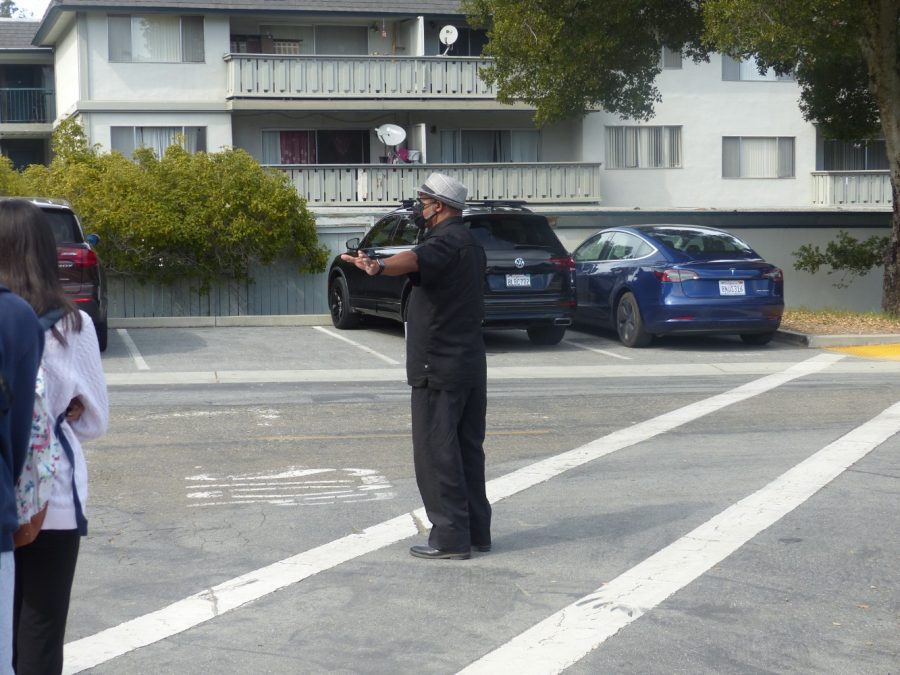 You hear a man say hello to you as you walk on campus each morning. In between your classes, he asks how your day is going. As you leave school, he leads you and dozens of other students safely across the street and wishes everyone a nice day. And the next day, when you arrive at school, he is there to lift your spirits once again. Little do you know, his kindness towards you is rooted in a story of his own.

Donald Newt, a campus security aide, is one of many unsung heroes at Carlmont. He brings a positive presence to campus each day, and from his kindhearted soul to his sophisticated wardrobe, Newt never fails to uplift students and staff alike.

Newt, a longtime Bay Area resident, has worked in security for years. But, his career path wasn’t always based at Carlmont.

“I was actually an accountant at a bank, and it got overwhelming,” Newt said. “I had a dream one night that I was being chased by this giant eraser. I said, ‘I need to get out of this stuff, [it’s] crazy.’”

After his unusual revelation, he started working in general security before landing at Carlmont as a campus security aide. However, he quickly learned that for him, the job was about more than just keeping people safe. He makes it part of his responsibility to greet everyone in his passing, widely contributing to Carlmont’s pleasant environment.

“Don always puts a smile on your face when you see him. I know whenever I see him, he’ll say something kind and wish me well,” said freshman Audrey Wong.

The story of Newt’s positivity starts at a young age. Being thoughtful and showing care towards others has always been ingrained in him.

Newt is a familiar face for many students, and even for those who don’t know him personally, his compassion goes a long way.

“I don’t know him too well, but whenever I walk into school, he is always there greeting people and saying ‘good morning’ which always gives me a good start to the day,” said junior Nicole Miranda.

Newt makes a lasting impression on many students; however, several still jump to conclusions about him because of his authority. Students don’t know that he often sees no reason to use it.

“They think that just because I’m an authoritative person, I’m going to do something authoritative to them. You don’t judge a person. You have to know them. You have to talk to them, see what’s inside of them,” Newt said. “A lot of people judge me because they don’t know me until they talk to me.”

Despite the judgment he gets from students here and there, Newt makes discernable efforts to express himself through his creative outfits. Whether a San Francisco 49ers scarf or a Stevie Wonder jacket, he never fails to give students a taste of his fun-loving personality.

Newt’s sense of style brings life to campus each day, but that’s not the only function it serves. He takes after his family by presenting himself with a unique and dapper outfit at work.

Between the chance to show off his wardrobe and the diverse group of students that Newt socializes with daily, the job holds a special place in his heart.

“I love what I’m doing. I feel I can always make a difference to that one person. That one person that gets shot back from everybody else,” Newt said.

As time goes by, things on campus change, students graduate, and people come and go. Newt takes on this challenge by finding new ways to demonstrate his kindness and strengthen the Carlmont community. While he can never predict what any given day will hold for him, he knows that one motto is for sure.