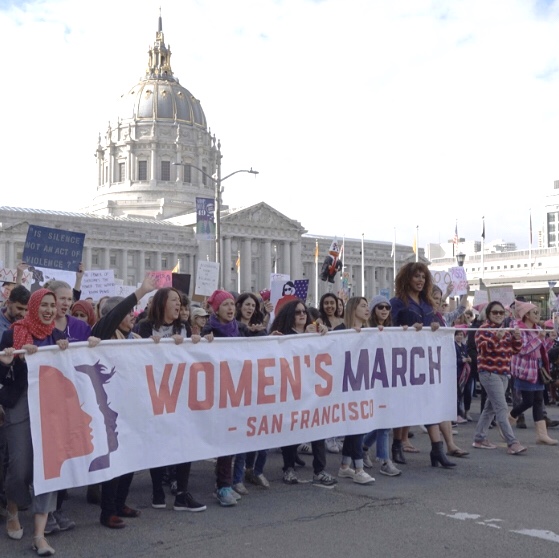 Honey Mahogany marches on the front lines of San Francisco’s 2020 Women’s March. “Honey continues to organize and fight for the most vulnerable communities in San Francisco every day as a legislative aide in the District 6 Office, and hopes to be able to continue her service on the SF DCCC [Democratic Congressional Campaign Committee] as an elected member,” Mahogany said on her website.

On Jan. 23, 2020, RuPaul Charles announced the 13 new drag queens who would compete for the title of “America’s first drag president” on his Emmy Award-winning reality show “Rupaul’s Drag Race.” But while competitors battle it out on screen, one drag queen has already entered the world of politics.

Honey Mahogany competed on season five of the show where she placed 10th in the competition, after being sent home in a now-infamous double elimination. Coming off of the international visibility of “RuPaul’s Drag Race,” the 36-year-old native San Franciscan parlayed her singing talent into local activism.

Mahogany, a co-owner of San Francisco’s oldest gay bar, The Stud, identifies as femme, non-binary and transgender. In 2017, she helped found Compton’s Transgender Cultural District to preserve the trans rights movement’s history. Mahogany, no stranger to protecting underground history, is now redirecting her focus to mainstream politics, announcing her campaign for the San Francisco Board of Supervisors.

“Help me make herstory as the first black, trans person elected in San Francisco and in the State of California,” Mahogany said in an Instagram post.

This post was met with over a hundred comments of love and support from Mahogany’s drag race sisters like Rock M Sakura. Sakura will be competing on season 12 of the show and she will be the only other San Franciscan drag queen to ever compete.

“Honey Mahogany represents so many aspects of so many underrepresented groups both in our community and in the LGBTQA+,” Sakura said. “Having her run for the board of supervisors is historic.”

While Mahogany would open up doorways for members of the gay and trans community in politics, she has made it clear that she wants every person’s voice to be heard in government.

“The Democratic Party claims to be about inclusivity and diversity, and yet poor folks, LGB and trans folks, and people of color oftentimes don’t feel welcome or heard making them less likely to engage in local elections or vote,” Mahogany said on her website honeyforsf.com.

Mahogany’s existence as a drag queen and trans person of color in the 2020 democratic race stands to shake up political norms. But Mahogany believes that San Francisco is ready to change what it looks like to be a part of mainstream politics.

“I do think that San Francisco still has that spirit of acceptance, pushing things forward, and change and diversity, but I do think that’s something we have to work to maintain,” Mahogany said in an interview with Queerty.

Mahogany’s views on the future of San Francisco are supported by LGBT youth at Carlmont High School. Members of Carlmont’s Gender and Sexuality Alliance (GSA) Daphne Krayn, Tess Rickson, Maya Henry, Charlize Brown, and Levi Konrad-Shankland were asked what they thought of Mahogany and other less traditional political candidates.

“Today, there are too few black people in government,” Krayn said. “There are almost no trans people even running for office so having this intersection of minorities is excellent for progress.”

Henry, a Japanese-Malaysian sophomore, is happy to see an increasing number of LGBT people of color entering mainstream politics. She hopes that future generations will get to see people who look like her representing the public’s vote.

“I think this is amazing because having this representation will definitely open people’s eyes,” Henry said. “There are people with racist and homophobic and transphobic views who will try to stop this, but I think this overall positive outlook will help advance the community in general.”

Brown, a sophomore, also acknowledged the fact that gay presidential candidate Pete Buttigieg made queer political life mainstream, but she feels that he didn’t represent the needs of poor, queer people and queer people of color. She hopes that seeing diversity in political candidates will become more common.

“I think this campaign is great because it’s a step forward in our community. It’s a great thing that black trans people are getting recognized and I hope that becomes the new normal,” Brown said.

Konrad-Shankland, like Brown, is happy to see diversity among local political candidates; however, he hopes that their identities don’t replace their political agendas.

“I’m glad to see a drag queen as a candidate,” Konrad-Shankland said. “However, I don’t think we should pick our politicians purely for diversity, but having good politicians who are in support of diversity is definitely a good thing.”