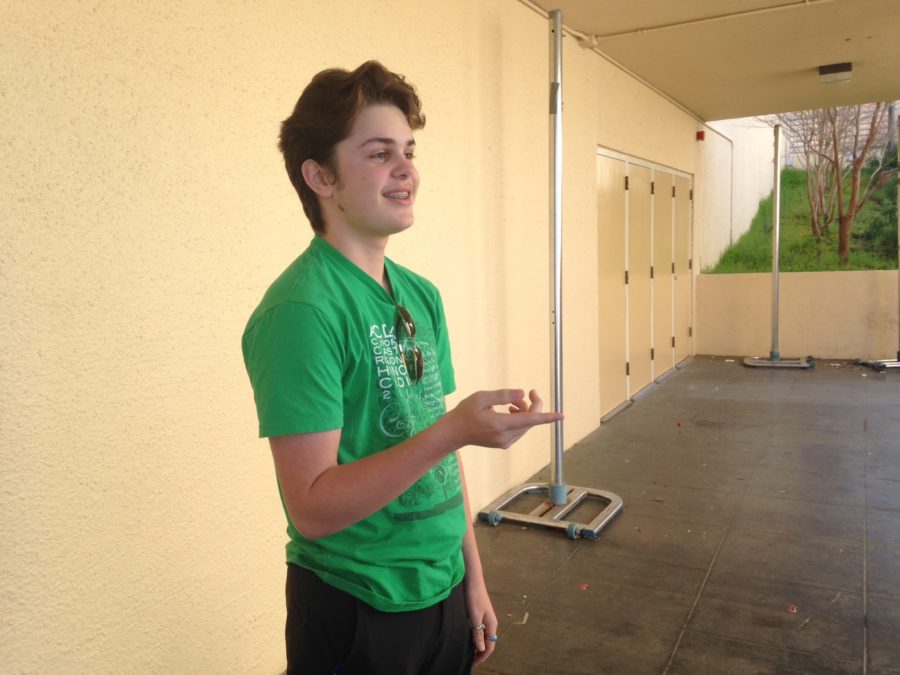 Sophomore Patrick Martin demonstrates how he prepared for his audition.

The perfect monologue has been chosen and memorized. The character’s mannerisms have been perfected at last. The fear of auditioning is washed out with a love of performing and hope of being granted entry into advanced drama.

During the past few weeks at Carlmont, drama students have been preparing for their auditions into advanced groups for the 2017-18 school year.

Carlmont offers four drama classes, ranging from beginner to advanced. Each class builds upon the skills developed in previous classes, according to the Program Planning Handbook. Drama classes provide students with an outlet to express themselves.

“I really liked the Drama I and Drama II classes, and I wanted to move on with the curriculum,” said Drama II student Haley Patane, a sophomore. “It just seemed really interesting.”

Students are motivated by a variety of reasons to audition for advanced groups. The appeal of a wider curriculum appeals to some. For others, the promise of something new and different is attractive.

“A lot of my friends are in drama. I like being in the theatrical arts, but I haven’t done too many non-musical things,” said sophomore Patrick Martin. “I wanted to get away from music for a bit.”

Although drama classes can be an exciting part of one’s schedule, they aren’t all fun and games. Entry into the upper-level group requires weeks of preparation. Audition requirements included a one-minute monologue, which is a speech, usually from a play, presented by a character. Students performed these monologues for drama teacher Nancy Martin.

“[Ms. Martin] asked me if I wanted to audition, and I said yes, I’d love to audition,” said Patrick Martin. “She asked me if I had a monologue, and I already had one prepared, so I used that one. And then I just did it.”

Drama classes provide students with opportunities for performance as well. Students get to show off the skills they’ve been working on in showcases and full-length plays in the fall and spring, as well as “One Act” shows, in which a single-act play is performed.

“In Drama, I’ve had a lot of fun preparing for One Acts,” said Shea Rouland, a junior. “I really enjoy the rehearsal process. Getting the chance to show people what we’ve been working on in our class is really cool.”