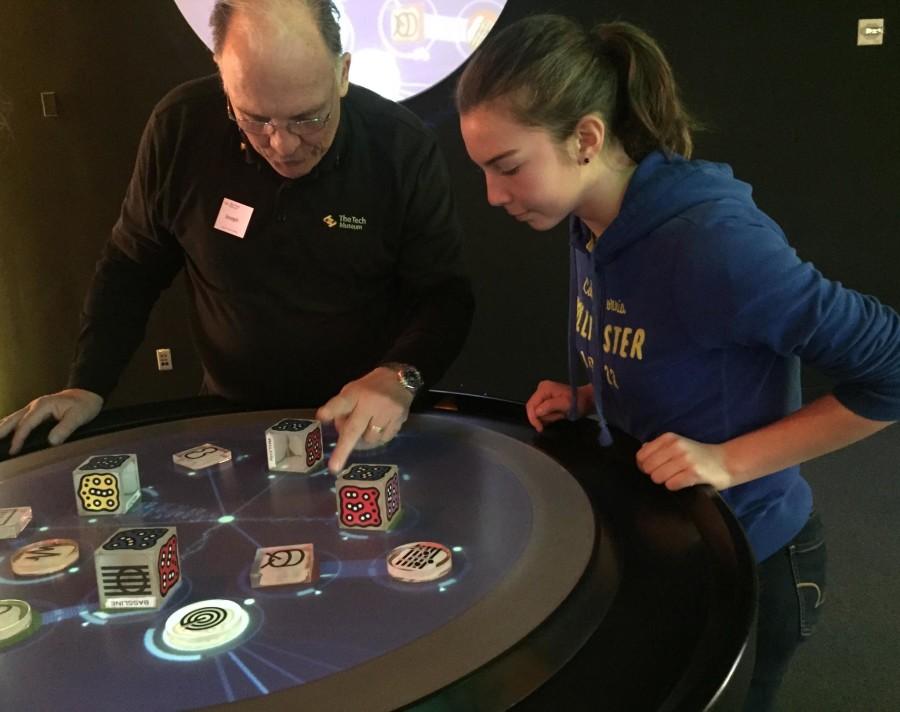 Sophomore Isabel Harnett learns how to make music from blocks during a field to the San Jose Tech Museum. "Each side of the block makes a different [musical sound] or rhythm when put down," said sophomore Kristin Ma, another BTI student.

Science has changed and continues to change the world. When given an opportunity to learn more about science, some Carlmont students jumped at the chance.

The Biotechnology Institute (BTI) functions like a school within a school. Students can use machines worth thousands of dollars, learn about the impact of science on the world, and be a part of a scientific community.

For some students, science is something that intrigues them. For sophomore Julia Griesbach, that’s one reason why she joined BTI.

Griesbach said, “I’m interested in finding out about the unknown, since a lot of people think they know about something, but actually don’t.”

Biotechnology is a science that manipulates living organisms. It has produced revolutionary products and techniques. Among these are anti-cancer drugs, more efficient ways of growing food, and mind-blowing discoveries that weren’t even possible hundreds of years ago.

Biotech teacher and BTI director Tina Smith said, “We introduce the industry, such as how scientists were able to become scientists. We also hope to pair students with mentors, as well as offer internships and relations with community colleges.”

In this program, students have been experiencing a science-influenced curriculum, with a focus in biotechnology. Despite the institute being in its first year, there have already been some highlights.

Sophomore and BTI student Emilio Barbosa Valdiosera said, “The program teaches about different biotech companies and offers lab experience. We also had a conference about it, and people who worked at biotech companies came in and talked to us.”

According to the BTI brochure, the Institute has “an industry-led advisory board.” Their partners include Gilead, a company recently in the headlines for its game-changing hepatitis C drugs Sovaldi and Harvoni, as well as companies such as LakePharma and DNA2.0.

However, the BTI has faced several challenges in its first year. The institute doesn’t offer advanced classes, which turned some people away. The BTI didn’t have much of a reputation for students to look at since it was so new.

BTI sophomore Alice Gevorgyan said, “I thought it was going to be really competitive and with top-percentile students, but not everyone in the program actually wants to become a scientist or is interested in that field.”

Some students think that the program could be even more science-focused.

“It would be nice if the curriculum was based on science, with history and English classes layered over that,” said Griesbach. “Since the director, Dr. Lundeberg, left, there has been less of a spark.”

However, Smith said, “We do want to bring science into the program to a certain extent, but meeting standards such as English and history are important. The program is science-focused, but it’s not just science.”

Despite some setbacks, many are glad that they joined the BTI.

Valdiosera said, “It’s like one big family in class.”