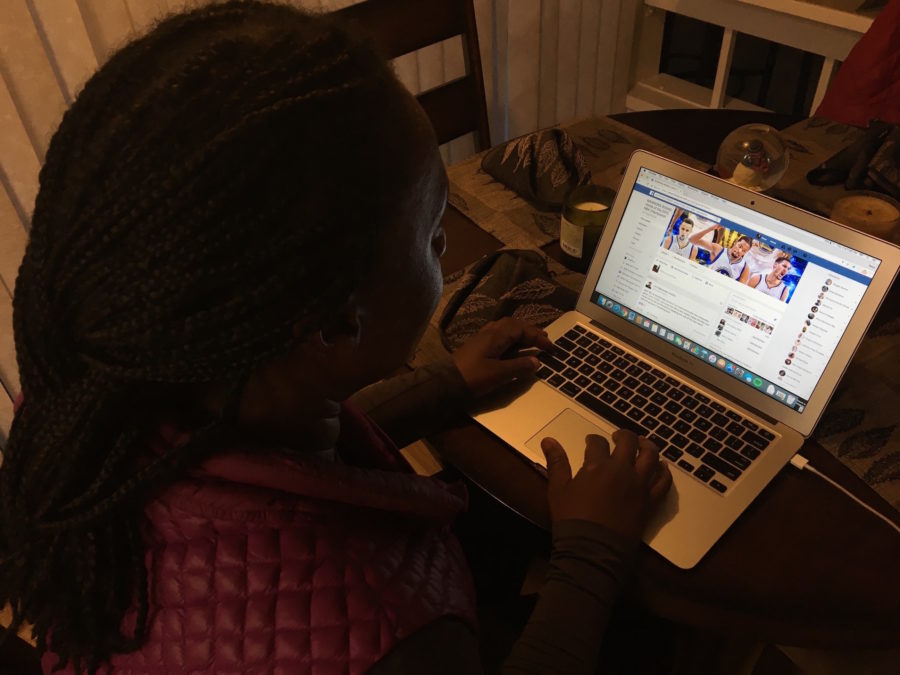 A Warriors fan looks at the "Warriors Rising! Home of the 2015 NBA Champions!" Facebook page. The page was made for encouraging Warriors fans during the playoffs.

Kevin Durant runs up the court after a fast break and dunks the basketball into the net.

The crowd goes wild and begins to chant, “Warriors! Warriors!”

Almost a year after a heartbreaking loss in the NBA Finals to the Cleveland Cavaliers, the Golden State Warriors are back in the playoffs with a vengeance.

The Warriors are starting the postseason by playing the Portland Trail Blazers led by Damian Lillard.

While the Warriors are preparing for the first round on the court, the fans are busy getting hyped.

On Facebook, group pages have been made for die-hard Warriors fans to show their support for their favorite team.

One group page, “Warriors Rising! Home of the 2015 NBA Champions!” run by Larry Trujillo, focuses on pumping up Warriors fans for a potential fifth NBA championship.

Though not a member of the Facebook groups, longtime Warriors fan Malika Carter is hopeful for the Warriors.

“I’m so excited, this is my favorite time of year. I’m planning my life around the games. I have to be in front of the television if possible, if not I record it,” said Carter.

Sophomore Liane Brown said, “I’m excited that the Warriors are in the playoffs. I can’t say that I’m surprised, given that they’re a phenomenal team, but due to what happened last year, I don’t want to get my hopes up too high about the end result.”

Even though many Bay Area residents like Carter and Brown are ecstatic about the playoffs, some Bay Area residents aren’t as excited. For example, Sandra Strongin, a junior, isn’t interested in basketball. However, she is still supportive of the Warriors playoff endeavor.

Strongin said, “I just have never really been into basketball. I don’t know how big a deal that is, but that seems really cool.”

The Warriors are scheduled to play the Trail Blazers in Game 2 of the series on April 19 at 7:30 p.m.