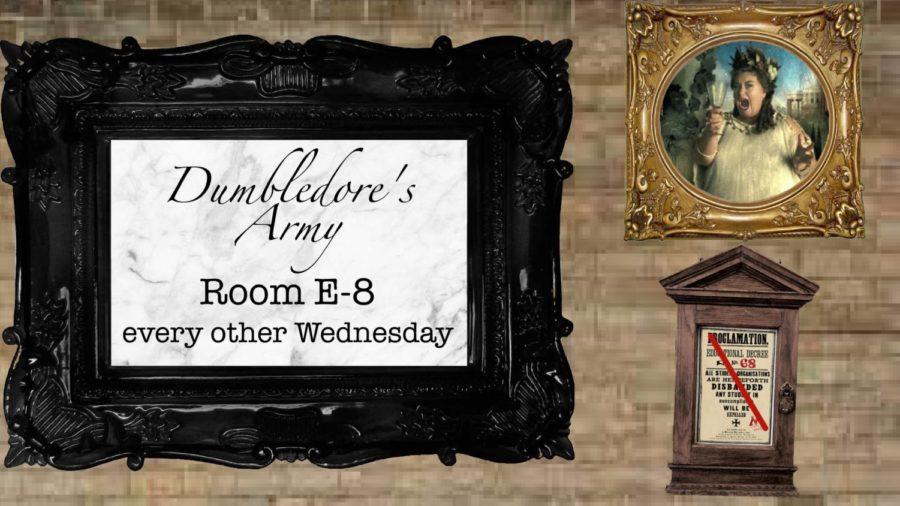 This is the flyer for Dumbledore's Army, showing members when and where to meet. "I thought I would strengthen my bond with my friends and create new ones with people who enjoy Harry Potter," said sophomore and club member Chloe Stanks.

The Dumbledore’s Army club is hoping to connect people by hosting contests and events that relate to the Harry Potter universe.

At the meetings, the Potterheads are divided into the four Hogwarts houses: Gryffindor, Slytherin, Hufflepuff, and Ravenclaw. The meetings usually consist of competitions like trivia or card games.

“I am very competitive. A lot of the club meetings are based on competitions between the Houses, and they give your House points if you win. I don’t know whether we just win bragging rights or chocolate, but I’m ready to win,” said club member and sophomore Nisha Marino.

The club wants to create a community of people who enjoy books and movies, but its primary focus is Harry Potter-oriented games.

“It’s nice way to meet new people who you know already have a similar interest that you can bond over, and you get to play games with Harry Potter themes,” said sophomore Chloe Stanks.

The meetings currently consist of fun activities, as well as the discussion of the Yule Ball, a formal ball held around Christmas that the leaders are arranging this year.

The leaders of Dumbledore’s Army are three sophomores. Gabby Tirsell is the president, and Ishika Agrawal and Anna Feng are the co-vice presidents. They took over the club from last year’s officers, who were all seniors.

“We were all members of Dumbledore’s Army last year with the previous presidents. They were seniors and we decided to keep the club and run it ourselves after they graduated because it was super fun and we knew a lot of people enjoyed it,” said Agrawal.

They want to accomplish a lot this year with trying to collaborate with other clubs and more events.

“We want to collaborate with the Feminist Club and use the female characters in the Harry Potter series to show strong leadership and lovable characters through these powerful woman. We also want to celebrate some Harry Potter-themed days and do the yearly Yule Ball during the winter time,” said Agrawal.

“If you like the series and want to have a good time, you are always welcome to join,” said Agrawal.

Knock on their Dumble-door during lunch every other Wednesday in E8.