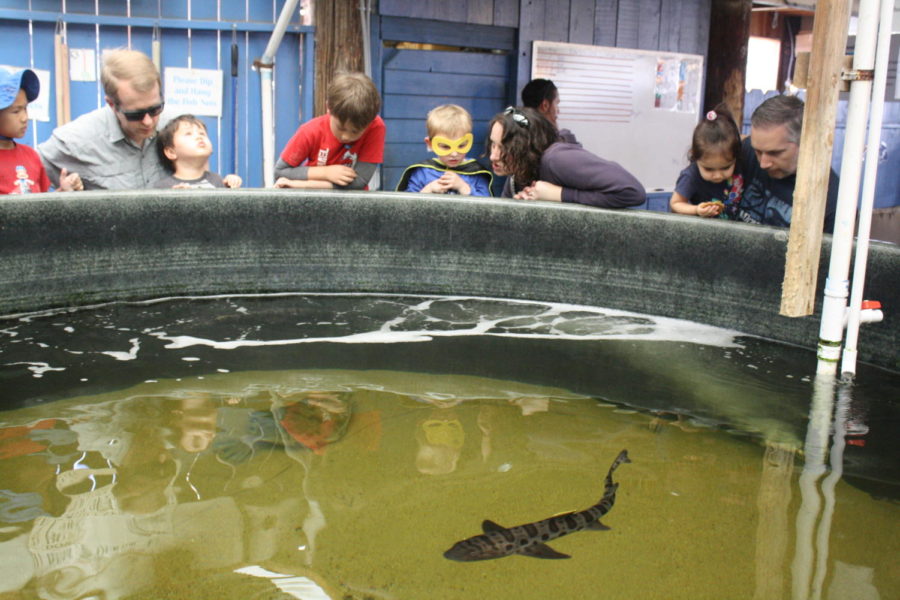 Families crowd around the leopard shark exhibit to watch these animals circle the tank.

Hundreds of people explored aquatic exhibits and conversed with scientists on Saturday, April 13, one of the rare days that the Marine Science Institute (MSI) in Redwood City was open to the public.

Earth Day on the Bay is MSI’s annual opportunity to give the community a glimpse of the research it conducts and to provide attendees with ideas for how they can help conserve the delicate ecosystem of the San Francisco Bay, a goal the institution has been dedicated to for almost 50 years.

“We try to get people out and interested in the creatures that we have here in the Bay and the oceans, and push people to be more aware of what we do, our educational programs, and how we serve the community,” said Ashley Shalazar, a science instructor and marine educator at MSI. “Our goal is to emphasize the special responsibilities of humans to the environment.”

Earth Day on the Bay included music by a children’s band, mud exploration, boat rides, food, lectures on sea life, and other activities.

The leopard shark exhibit appeared to be the main attraction as people waited in a long line to see the spotted creatures and touch their slippery skin.

The sharks are only kept inside MSI for a few months, where they are tagged and analyzed. They are then released back into the Bay to reproduce and continue their lives outside of captivity.

“Both my daughter and I never expected that we would be able to touch a real-life shark today,” said Kristina Colani, a local. “I think the interactive aspect of it is a great way for kids to learn about these delicate creatures.”

At around 2 p.m., excited children could be seen hoisting a net full of fish and searching for specimens in the mud.

Earth Day on the Bay also featured face painting, under the sea photo booths, and a popular children’s band.

“I decided to come here because it is a beautiful day and I wanted to do something fun with the whole family,” said Michael Brooke. “Everyone is so lively and the music and art is a great addition. This really exceeded my expectations!”

At 3 p.m., people had the opportunity to pay $20 to ride the boat which transported them around the Bay. Led by one of the MSI educators, many learned more about the creatures living in the Bay and what they could do to help keep the water clean and healthy.

“I learned so much about the Bay that I never knew even though I have been living right next to the Marine Science Institute for seven years,” said Wendy Andrews. “Riding the boat was awesome and definitely worth the money.”

In the summer, MSI offers several science camps for all ages and internship opportunities for high schoolers and up. These summer programs engage the youth with hands-on projects that keep their bodies and minds active.

“The camps that we offer in the summer are a great way for children to excite their curiosity and eagerness for learning about, and caring for, the environment,” said Stephanie King, an experienced science instructor. “It also gives kids an awareness and appreciation of nature and animal life, and how they can play a role in protecting it.”