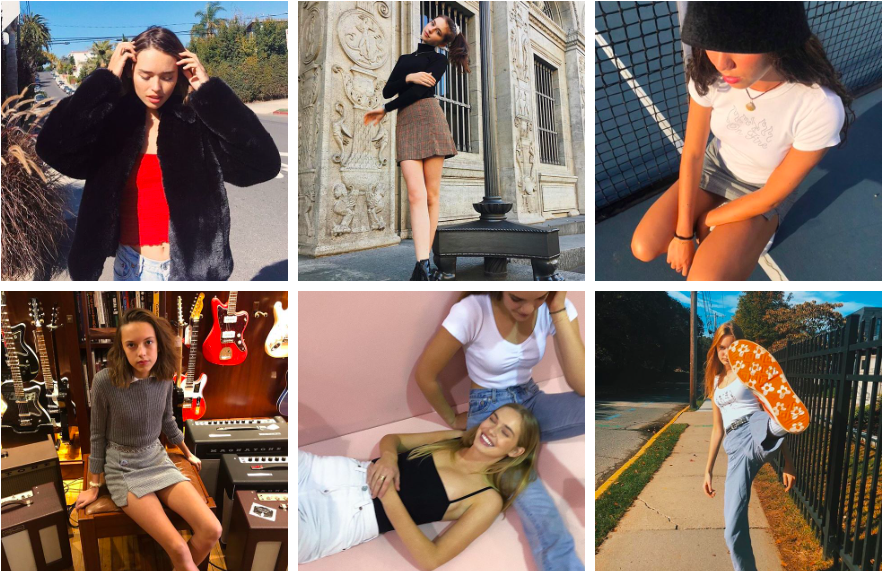 A preview of Brandy Melville's lookbook showcases Brandy Girls wearing their "one size fits all" clothing.

In an age where young girls and women are more vocal than ever, there’s an area for them to speak up once again: the clothing industry.

This is nothing new. Change is already in progress due to women urging companies to represent different types of women in their most real forms. Some brands have listened, becoming better at adapting a more inclusive culture by hiring more diverse, curvy, and unedited models to advertise their clothing and appeal to a wider market.

But others have not.

One brand in particular that appears reluctant to join the movement is Brandy Melville. Brandy Melville is a girls’ fashion brand originating from Italy that further popularized the petite crop tops, tiny skirts, and high-waisted bottoms that are adored by many American teenage girls.

Its Los Angeles-inspired clothing has succeeded in attracting much of the young female population. In 2014, a Piper Jaffray survey on teen spending found that Brandy Melville was ranked No. 1 among brands that teen girls report wearing.

Despite its success, the company has received backlash concerning the image it uses to attract its customers. Its image portrays “Brandy Girls,” or ambassadors, modeling its clothing on its Instagram feed. The photos showcase young, slim, California girls out and about in cafés, shops, cities, and beaches, appearing carefree and fashionable. Brandy Girls have strikingly thin frames and long legs, making it easy to automatically differentiate them from the average female body type.

This marketing method isn’t completely discreditable. In the same way that larger or curvier women have been made to feel ashamed for their size, or “fat shamed,” in American society, very skinny women also experience harsh attitudes towards their frames, simply for not appearing healthy or “normal.” By featuring girls with small physiques, Brandy Melville admittedly does promote the acceptance of this body type.

However, acceptance is not the same as idealization. Brandy Melville evidently glorifies this image by exclusively showcasing extremely thin girls on their Instagram feed and website. The brand makes no attempt to model their clothing on girls of any other shape.

Even more disturbing is the brand’s one-size policy. On a sign hung up in their stores are the words “one size fits most,” and online shoppers will find that under each item’s sizing they are given only one option: “fits x-small/small,” or the occasional “fits medium.”

Brandy’s idea of small and medium are far from accurate, and their claim that one size fits most is simply a lie. According to the company’s website, their skirts model a waist measurement of 24 inches, and their pants stretch up to a size two.

The Centers for Disease Control and Prevention reported that the average 19-year-old woman has a 33.62-inch waist, making it basically impossible for the majority of American females to squeeze comfortably into Brandy Melville skirts. In addition, a 2016 study published by the International Journal of Fashion Design, Technology, and Education reported that the average American woman is a size 16 to 18, nowhere near Brandy’s size two pants.

To say that one size fits most is not only incredibly false but also promotes an unhealthy expectation about the body sizes of young women who want to dress a certain style. Lured in by the store’s popularity, many first-time customers look forward to trying on its clothing and walking away happily with a purchase.

But upon discovering that every pair of jeans you were admiring can barely squeeze past your thighs and thinking that every crop top makes you look fat, it’s easy to feel loathsome and ashamed of your body. There has to be at least one piece of clothing in the entire store that will fit, right?

Then after realizing that no, there isn’t, you must overcome the challenge of leaving the store empty-handed, even though you admired the style of clothing and would have loved to buy something.

In a 2018 article published in The Mercury News, high schooler Raksha Sen from Mountain View expressed her disappointment in her Brandy Melville experience: “You feel uncomfortable returning the clothes. When the cashier asks you why you’re returning them, you have to say that they’re too small for your body,” she said.

Those loyal to the brand might say that people unable to fit Brandy’s unreasonable expectations can shop elsewhere. But the truth is, the complete absence of sizing variety is still damaging to the self-image of its market — young girls.

Brandy’s “one size fits most” policy basically says that they must have a very specific body type in order to wear their style, causing girls to criticize their appearances instead of the company’s ludicrous standards.

And its popularity doesn’t help. Continuing to support the company despite its troubling exclusivity further implies that if this style and this body type are trendy, then actual average-sized girls are simply unwelcome.

This problem should not be dismissed. According to the Eating Disorders Coalition, eating disorders are the third most common chronic illness among adolescent females. Furthermore, those between the ages of 15-24 years old suffering with anorexia are 10 times at risk of dying compared to their peers of the same age.

Still, Brandy Melville remains an admired shopping destination by many American teenagers. But in order to make inclusivity a reality for women, its customers and critics must recognize and protest the damage it sells through their sizing and marketing techniques.

The conversation about transforming women’s body standards is honestly getting pretty old. And the fact that we still need to have it is both appalling and tiresome.