Editorial: Carlmont is not free to go phone-free 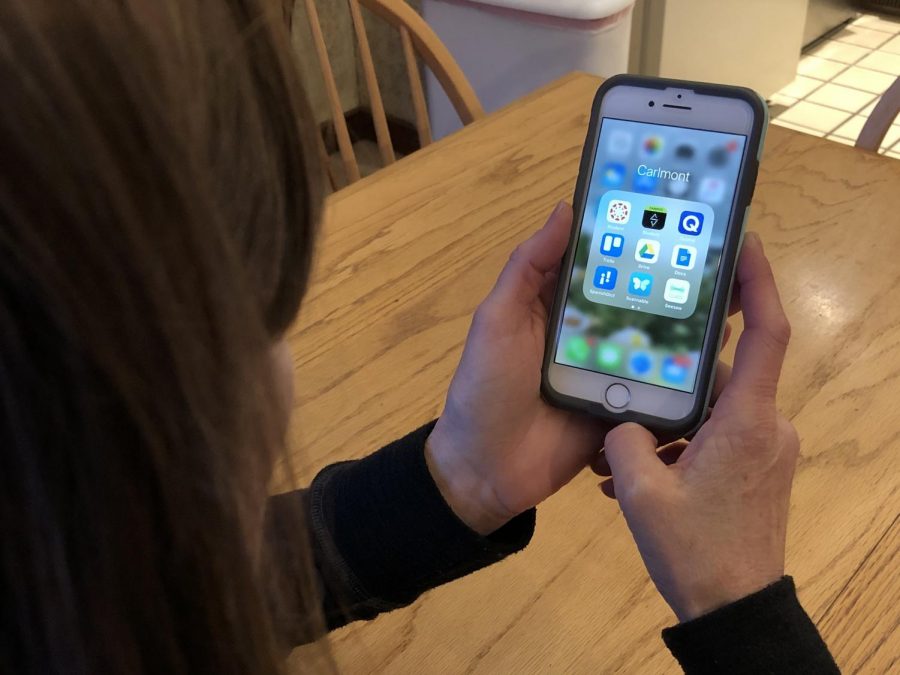 In the first week of school, most teachers gave students a presentation instructing them to download certain apps for the school year.

“Please take out your cell phones.”

As the minute bell echoed through the halls of Carlmont High School on the first day back to school, teachers were already asking students to have their devices on-hand. Why? To download two apps deemed necessary to academic success: Campus Student, better known as Infinite Campus, and Canvas Student.

Meanwhile, at San Mateo High School (SMHS), students were snapping their cell phones in locked pouches as part of an initiative to create a cell phone-free environment.

SMHS implemented this no-phone policy beginning on the first day of the 2019-20 school year. The goal, as reported by ABC 7 News, was and is to encourage students to be present and engaged in class, as well as when socializing with their peers.

The locking pouches that students carry around are provided by Yondr, a company based in San Francisco that aims to create phone-free spaces for any venue, including schools. Each morning, students place their phones in their Yondr cases, which lock magnetically. Students then carry the cases around until the final bell, when they are permitted to free their phones with the unlocking bases located in each classroom.

While some have attempted to get around the new policy by locking up fake or dead phones in their Yondr cases instead of their real ones, according to CBS SF Bay Area, the school has received mostly positive feedback.

In contrast, Carlmont students seem to be consumed by their phones throughout the day, a reality that is not likely to change as the school begins to rely heavily on technology for everything from signing up for flex periods to simply completing classwork or taking tests.

Reliance on cell phones is part of a larger technological dependence, including the use of SMART Boards in the classroom. Though the boards have undoubtedly revolutionized the in-class learning experience, it has become evident that if the board doesn’t work, class does not continue. If the wifi is down or the board has to be periodically re-calibrated, it takes away from valuable instruction time, which has already decreased eight minutes per class each week due to the pilot flex schedule.

Additionally, because of such technological dependence, many students without access to internet or a computer at home are at an immediate disadvantage.

Sprint’s 1Million Project, which began in 2018, partnered with Sequoia Union High School District to try and bridge the “opportunity gap” between those with and without at-home internet access. During the 2018-19 school year, the former director of instructional technology, Bob Fishtrom, reported that the project gave out 252 hotspots to students in need.

However, the 2019-20 school year brought with it the project’s decline after Fishtrom, who spearheaded the initiative, left his position at the district.

So, back to square one.

Though there is nothing wrong with utilizing technological advancements to enhance classroom learning, the fact that everything is supposedly so easy to access has evidently led to neglect for those on the other side of the opportunity gap.

After all, why update an assignment on the board when the teacher can send out a notification via Canvas and hope that every student has access to the internet and is addicted enough to their cell phone to see it?

Carlmont could not possibly make headlines by following in the footsteps of SMHS and going phone-free. This is simply because student success is driven by access to the apps, docs, and Canvas notifications that appear on their phones at all hours of the day.

Though we don’t have flying cars or hovering boards as the writers of “Back to the Future II” had hoped, we are at the heart of the age of technology; there is no going back.

Therefore, it’s important for the district, staff, and students to keep in mind that technology is not necessarily accessible to everyone and to find a happy medium, such as providing the option between offline and online homework or relying as much on the white board as on the SMART board, so that just because the wifi or computers stop working, it doesn’t mean the students do too.

*This editorial reflects the views of the Scot Scoop editorial board and was written by Veronica Roseborough.