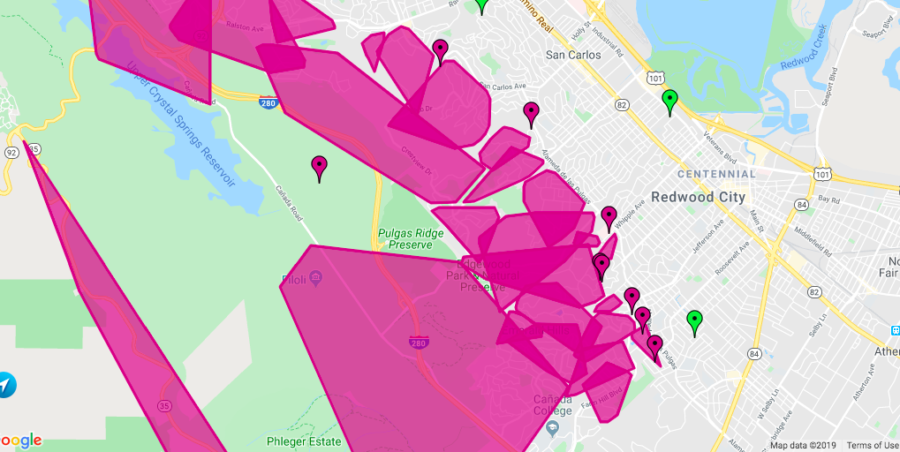 PG&E's power outage currently affects all areas surrounding Carlmont. The pink areas of the map indicate regions whose power has been turned off.

Less than a year ago, fires blazed through California, prompting Carlmont to shut down for safety measures due to unhealthy air quality. Once more, with yet another set of wildfires scorching through the state, history is repeating itself.

Only this time, the effects of the fires are much worse; with winds reported at over 90 mph, fires continuing to spread, and PG&E shutting off power for over 940,000 households with no projected end, students are left with far more questions than answered.

This uncertainty is further perpetuated by the lack of communication on behalf of Carlmont and the Sequoia Union High School District. With many students without power or the consistent ability to complete their assignments for tomorrow and because of the all too recent memory of school’s cancellation last year, students are looking for administrative direction to figure out their plans for tomorrow.

No such direction has been provided.

Other schools in the area, including Fox Elementary and Ralston Middle School, have announced that, due to power outages, they will not be in session tomorrow, Oct. 28, 2019. Carlmont has stayed silent.

According to the map which displays those affected by the power shutoff, Carlmont appears to remain unaffected. Much of the area surrounding Carlmont, however, is without power.

Beyond the status of Carlmont’s electricity, unhealthy air quality is also a primary concern, something that is also yet to be addressed by the school. With a current Air Quality Index (AQI) of 168* reported in San Carlos and with winds projected to carry more smoke into the area overnight, it’s easy to assume that, given last year, the schools may close tomorrow.

But with no information to indicate otherwise, school is expected to be in session as usual.

It is simply irresponsible for the school to remain silent amidst this problem.