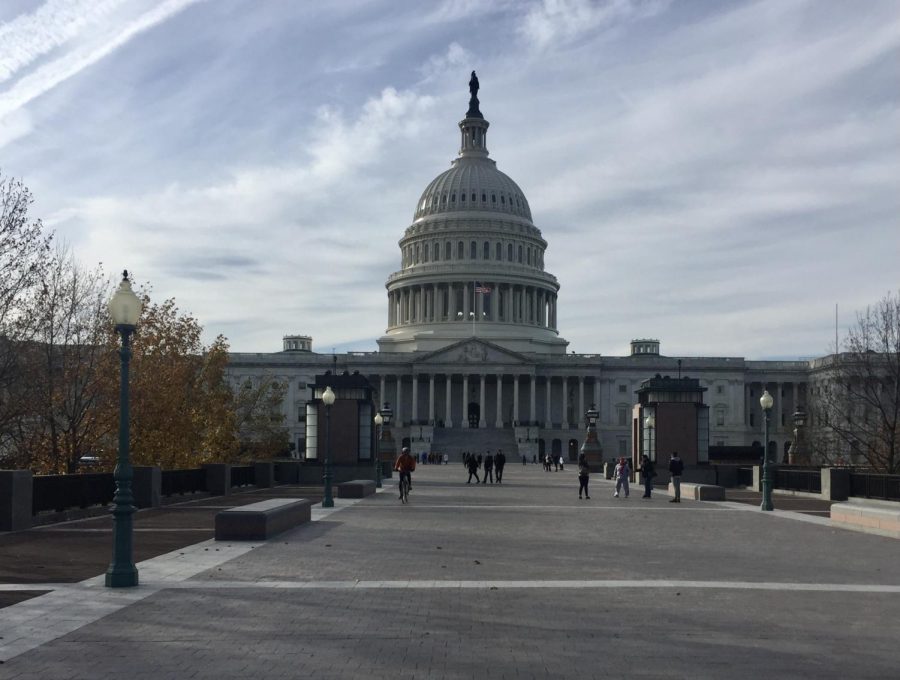 Pedestrians and bicyclists utilize the walking paths in front of the U.S. Capitol building.

Glass shatters as representatives quickly evacuate the House. Ushered away, the same people that represent the pinnacle of American democracy hide from a mob of insurrectionists who sought to “stop the steal” by disrupting the peaceful transfer of U.S. presidential power.

This was the scene on Jan. 6, 2021, a day that will be remembered as one of the darkest in American history. Few events have been such a direct attack on our most sacred democratic institutions.

During the past year, partisan conflict over this event has scarred the halls of Congress. The bipartisan Select Committee to Investigate the Jan. 6 Attack on the U.S. Capitol has been the source of much ire from the Republican side of the aisle, yet no attempts at silencing the committee have been as brazen as the Republican National Committee’s (RNC) recent censure of U.S. Representatives Liz Cheney of Wyoming and Adam Kinzinger of Illinois.

“Representatives Cheney and Kinzinger are participating in a Democrat-led persecution of ordinary citizens engaged in legitimate political discourse,” said the RNC’s formal resolution.

Despite subsequent attempts by the RNC to walk back the severity of their statement, the gross mischaracterization of the events of Jan. 6 should worry Americans. The RNC, which oversees one of the two major political parties in America, appears to be beholden to its more extreme supporters, those disillusioned by lies of electoral fraud. Its unwavering support for former President Donald Trump, despite clear risks to democracy, is frightening.

However, there is a bright spot. The reactions from fellow Republicans, especially the higher-ups, should give our nation hope.

“We saw it happen. It was a violent insurrection for the purpose of trying to prevent the peaceful transfer of power after a legitimately certified election, from one administration to the next. That’s what it was,” said Senate Minority Leader Mitch McConnell.

Not only should McConnell be applauded for sticking to the facts and refusing to bend to the pressures of the RNC, but he also should be recognized for definitively repudiating the RNC’s characterization of the insurrections. McConnell, as the head of the Republicans in the Senate, knows he has a critical role to play in quelling the fires of conspiracy and misinformation.

In recent weeks, he has begun to legitimize the commission. McConnell could easily have given up on defending the work of the committee. In the light of a Pew Research Center survey released on Feb. 8, 2022, 79% of Republicans believe the commission on the events of Jan. 6 will not be impartial and fair, showing how some may view McConnell’s defense of the committee as politically dangerous.

This may be the case, if not for the fact that McConnell is far from the only one criticizing the RNC and supporting the work of the Jan. 6 commission. Senator Mitt Romney, a prominent Republican from Utah, called the RNC’s censure “stupid” and further denounced their characterization of Cheney and Kinzinger, even though Romney is the uncle of an RNC chairwoman.

“One, to sanction two people of character as they did. But number two, to suggest that a violent attack on the seat of democracy is legitimate political discourse is so far from accurate as to shock and make people wonder what we’re thinking,” Romney said.

In this political climate, it takes courage to protect democratic ideals. Partisanship has caused this country to become so divided that whichever side of the aisle a person may align with, they will most likely believe the narrative pushed by politicians on that side without regard for facts.

Despite political differences and the divisiveness present in our political system, several level-headed Republican leaders have defended our most basic principles. Kinzinger and Cheney will be seen as being on the side of democracy in our future history textbooks. As Romney said, these representatives are part of the few who “seek truth in the face of vitriol.” Similarly, McConnell and Romney (as well as several other leading Republicans) will be remembered for standing alongside these defenders of democracy in a time of partisan division.

As our nation moves forward, we need to focus on choosing leaders with our country’s best interests in mind. And specifically, support those who recognize the attack on the Capitol for what it was – as a fundamental threat to the foundation of our democracy.

*This editorial reflects the views of the Scot Scoop editorial board and was written by Hudson Fox.