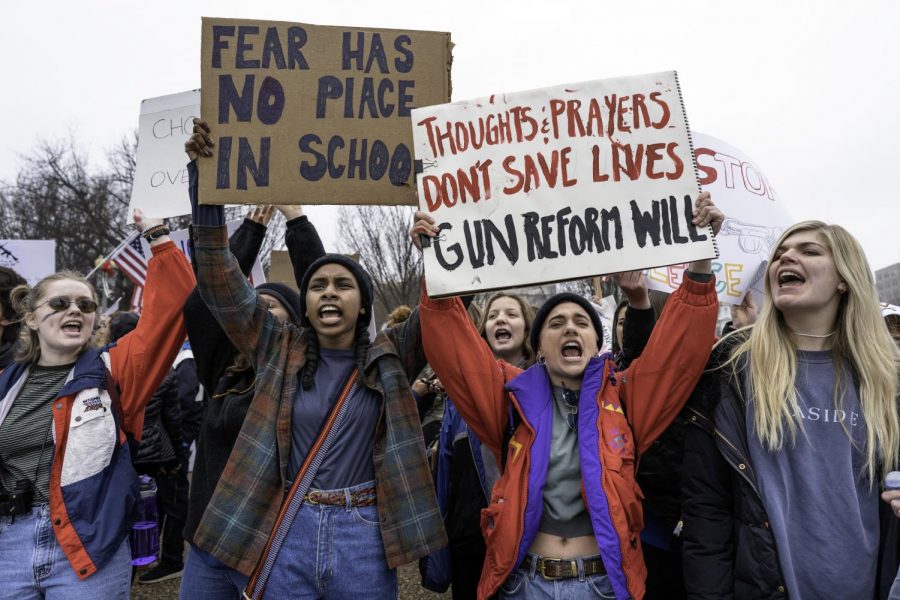 Despite the numerous protests and rallies against gun violence, an alarming amount of deaths are still gun-related today.

As the announcement ends, students get up and barricade the classroom door with their desks. The teacher closes all of the window shades and turns off the lights. No one says a word; they sit in silence, just as they would if a real shooter were on campus.

Sadly, this protocol is standard in many schools across America due to the mass shootings in recent years. Children as young as 7 years old grow up doing these drills in schools, assuming that it’s natural to learn how to hide from a shooter.

This shouldn’t be a surprise to anyone. Nowadays, people live knowing in the back of their minds that a shooting could happen at any time, even at school.

On Feb. 14, 2018, 19-year-old Nikolas Cruz shot and killed 17 people at Marjory Stoneman Douglas High School in Parkland, Florida. As a result, the March For Our Lives movement arose, giving way to multiple protests across the country to end gun violence.

To some extent, these calls for change worked. For instance, on Feb. 27, 2018, the Florida House committee raised the minimum age to buy rifles from 18 to 21. But besides this, not much has changed in regard to further gun control and regulation.

These small acts are not enough to end gun violence. In fact, because so little has been done, gun violence has gotten worse.

In essence, there were more mass shootings in 2019 than there were days in a year. Because of this, 2019 was dubbed the “age of mass shootings” by professor James Densley, which seems to be a fitting name.

On just the first weekend of August 2019, two of the deadliest mass shootings in the U.S. occurred within 24 hours of each other. Twenty-two people were killed when a shooter opened fire in a Walmart in El Paso, Texas, on Aug. 3, 2019. The day after, nine people were killed near a bar in Dayton, Ohio. On top of that, these two events happened not too long after the Gilroy Garlic Festival shooting, which occurred on July 28.

At this point, gun violence has become such a huge and frequent issue that no one is shocked anymore when they hear of another mass shooting. Day after day, as people refresh their Twitter feed, more news of mass shootings come up; it’s become so recurrent that these shootings blend together and begin to sound like the same story but in a different place.

However, gun violence should never become routine. As we have moved into 2020, other issues covered up the gun conflict. With the U.S. conflict in Iran, the 2020 elections, and the coronavirus outbreak, many have turned their attention away from gun violence.

This is a dire mistake.

On the very first day of 2020, 177 people died from gun violence. Additionally, it hasn’t even been two months into the new year, and over 4,000 people have been killed due to guns.

In light of all the new problems, we have forgotten about this significant and ongoing issue within our country.

And whenever the gun debate comes up again, it always grows into an “us versus them” or a “liberal versus conservative” issue. It’s eventually going to become a continuous cycle of us fighting each other over guns, forgetting about it, then remembering it, and fighting again.

We get so caught up in debating with one other that we forget the real issue: people are dying due to gun violence, and it’s no longer surprising to hear that.

Regardless of your stance on gun rights or gun control, we should all agree that something needs to change to stop the normalization of shootings and gun deaths. Gun violence should never be a regular occurrence, and we must always remember that.

*This editorial reflects the views of the Scot Scoop editorial board and was written by Samantha Chu.