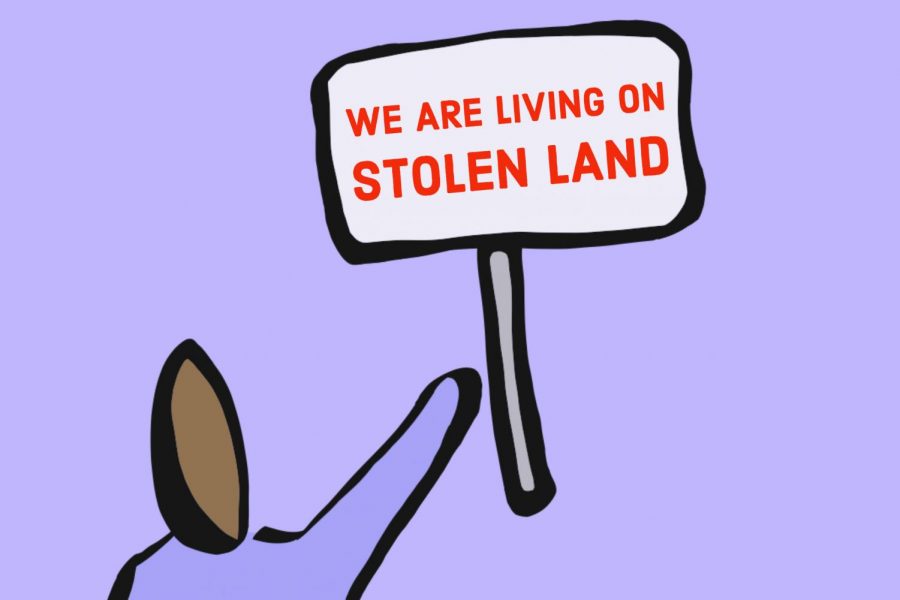 A student holds a sign to protest centuries of Native American oppression.

Propelled by racist sentiments and the glorious ideals of “liberty, freedom, and equality,” Native Americans have been stripped of their land, culture, and history.

But more than any other ethnic minority in the U.S., Native people’s largest oppressor comes from invisibility. Over and over, schools follow the comfortable narrative that the arrival of Europeans was an unlucky, unfortunate moment in Native history. Too quickly, genocide can be boiled down to one page of a history textbook, and centuries of trauma are sugar-coated.

As our curriculum paints over Native struggle, many forget about the Indigenous groups remaining, and the mistreatment they have faced within the last century goes unnoticed.

For example, in the 1900s, a widely unknown cultural genocide occurred as thousands of Native children were forced into boarding schools. In a government-funded attempt to erase Native culture, these schools hoped to assimilate them into “white society.”

Children were forcibly removed from reservations, taken from their parents, and relocated to schools miles away from their tribal grounds. Once there, children cut their hair, went by traditionally European names, and left behind their tribal clothing.

By 1925, there were more than 60,000 Native children in boarding schools, and it wasn’t until the 1970s that the government outlawed this practice. But, even then, Indigenous groups continued to struggle.

Although laws like the Indian Child Welfare Act were passed to protect Native children from any more harm, many groups face federal backlash in other ways. For example, Native women are 2.5 times more likely to experience sexual assault than any other ethnic group. Additionally, according to CNN, Native women made up 5,712 reports of slain or missing people in 2016 alone.

However, little support from local law enforcement or the U.S. government prevents tribes from overcoming these issues. In a New York Times article, Jack Healy wrote about how unresponsive government has become a norm for many tribes. When a person goes missing, some groups have even resorted to using neighborhood search parties after the police continuously refuse to help.

As a whole, Native Americans are also 5.3 times more likely to be hospitalized with COVID-19 than white people. According to USNews, this is the largest disparity for any racial or ethnic group even though Native people make up less than 3% of the U.S. population.

Despite these setbacks, Native Americans have continued to push ahead. Nationally, people celebrate November as Indigenous People’s Month, and following the 2020 election, six Native American candidates were elected to the U.S. Congress. For the first time in our history, Native culture is continuously being celebrated and represented.

The future for Native Americans does not have to be what it was like in the past. Understanding the depths of Native struggle is the first step; giving them the resources they need to build themselves up is the next.

It’s time that we honor each other’s differences and celebrate our diversity.

*This editorial reflects the views of the Scot Scoop editorial board and was written by Kaylene Lin.