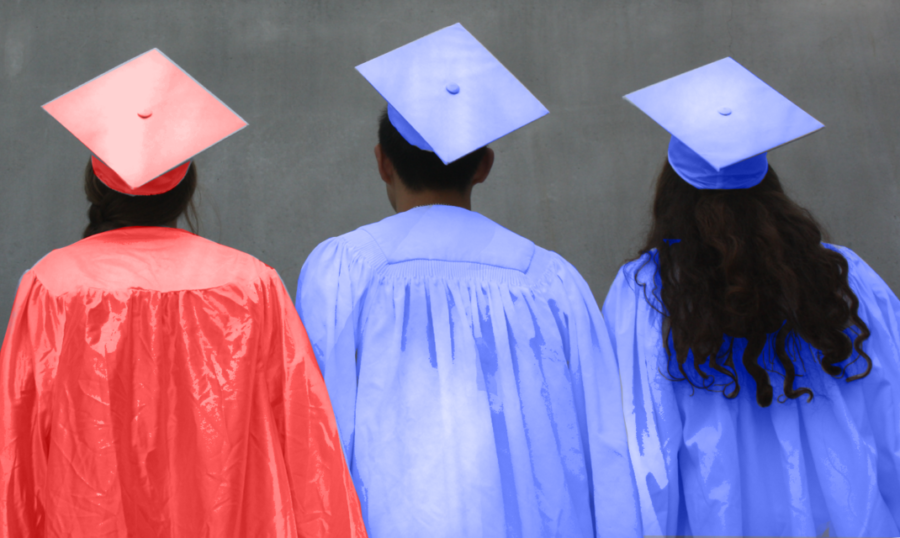 Many graduates have liberal political viewpoints.

The United States of America is rarely united.

For much of America’s history, its political climate has been divided. And, according to Pew Research Center, the political gap in the United States is widening.

Education seems to be a major influence. Pew Research Center classifies a Liberal as a person who is “highly educated and financially stable” and Conservatives as “less educated and in favor of economic fairness.”

Gaby Pierce is a sophomore at Carlmont who moved to California in 2017 after growing up in Little Rock, Ark.. She reflected upon her educational experiences in Arkansas.

“In the south, a lot fewer people are college educated,” Pierce said. “The education system is so terrible there. I think if more people went to college, the schools would be better.”

Pew Research Center found that college-educated individuals most often vote liberally. However, according to the Washington Post, over 60 percent of Americans lack a bachelor’s degree.

Another factor that contributes to one’s beliefs is childhood environment.

Shelby Weiss, a senior from Jacksonville, Fla., and a self-identified Republican, believes that children are raised to have certain political viewpoints.

“I think family and where people grow up are the biggest influences on personal beliefs,” Weiss said. “When a child has the skills and education to formulate their own beliefs, they are already corrupted by the bias of others around them.”

Ayan Dixit, who is a sophomore and member of Carlmont’s Democrat club, said,  “I think family is a huge factor. All of my friends tend to stay with the same affiliation of their parents.”

An NPR article says that families tend to live in areas with similar political viewpoints.

Ryan Versen, who is the Vice President of the Conservative Thinkers club at Carlmont, spoke about conservative beliefs.

“A conservative thinker is pro-First Amendment. Even if we don’t believe someone’s views, we give them the chance to speak their mind,“ Versen said. “We may be pro-life in terms of abortion or maybe for the Second Amendment, but we believe that heavy tax cuts are the key to a strong economy.”

As Dixit discussed liberal ideologies, he said, “Democrats think that a larger government can be used as a tool to support everyone in our country and those who want to join.”

This separation in viewpoints could account for the difference of information received in the United States. Children are often taught different material based on whether they live in a conservative or liberal region.

The textbooks at public schools in Texas, a consistently Republican state, omit information about evolution and the civil war.

NPR reported on the Texas Board of Education’s conservative learning standards: “The books downplay some issues- like slavery- and skirt others- like Jim Crow laws. It’s definitely an attempt to whitewash our history as opposed to exposing students to the reality of things.”

The reality of things is that educational standards vary among states. A freshman biology class at schools like Carlmont in California has a unit dedicated to the Theory of Evolution while freshman biology in Texas does not cover the topic.

“Now that I think about it, I haven’t learned that much about evolution,” said Ashley Aronson, a junior at J.J. Pearce public high school in Dallas. “It’s not that it was ever denied, it was just never discussed.” 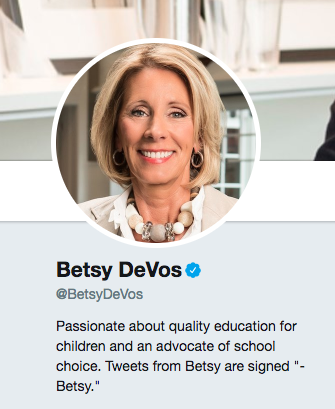 The inconsistency of nationwide learning standards could become more prominent.

The Secretary of Education Betsy DeVos is an “advocate for School Choice,” the ability to seek alternative options to public school like private or charter schools.

“If you live in an area that doesn’t have a great public school and you have the money, normally you go to a private school,” Aronson said.

Still, there are many children who are unable to afford private education.

Children who are unable to attend a better-funded school often lack the means to attend college.

In the 2017 Alabama Senate election, Roy Moore, the Conservative candidate, received far more votes from non-college educated individuals than he did from college graduates.

Online platforms such as Google and Facebook, are known for displaying information based on a person’s web history and geographic location. A person in one state can visit the same platform as a person living in a different state, and they can see different homepages.

In a TED talk, Eli Pariser, author of “The Filter Bubble,” spoke about the filtration of information coming from online sources.

“The internet shows us what we want to see,” said Pariser. “It’s not necessarily what we need to see, and we don’t get to see what gets filtered out.”

This difference in received information furthers the gap between Liberals and Conservatives because they receive entirely different versions of an event without ever seeing the other side.

Pariser saw this when he asked friends of his to type the same keyword into Google and to send him screenshots of their results.

“I asked my friends to Google ‘Egypt’ and send me what they got,” said Pariser. “When I put them side by side, I didn’t even have to read the links to see how different the pages were.”

Because some regions in the United States overwhelmingly favor one party over the other, it can be difficult to live in those regions and have opposite beliefs.

In Arkansas, Pierce found herself being a liberal minority.

“My friend and I were the only people in my grade that had come out as openly liberal. Everyone else wanted Donald Trump to win,” Pierce said.

Likewise, Versen described the challenges of being a conservative in liberal Silicon Valley.

“It’s hard to speak your mind without being called a Nazi, racist, homophobe, xenophobe, or transphobe,” Versen said. “Just because I have different ideas, everyone thinks I’m the bad guy.”

Perhaps one day, America as a society will overcome the political divisions that drive many of its citizens apart.

“Everybody makes assumptions about what the other person believes in, and often these assumptions are not true,” Pierce said. “I think when we stop making assumptions and just understand perspectives from both sides, we can actually find common ground in our country.”