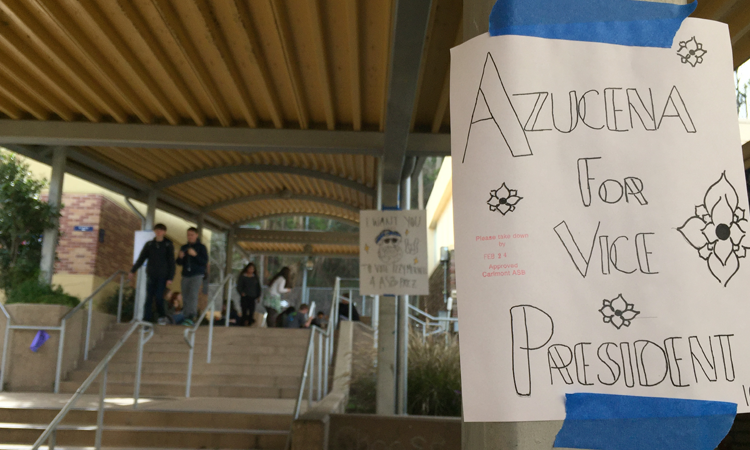 Posters made by candidates can be seen around campus.

“Talk positively about yourself and don’t talk about your opponent at all.”

This is the advice that Activities Director Jim Kelly gave to students at the Class Officer Informational Meeting on Feb. 6.

At the meeting, students learned about the prerequisites for running for an officer position and how to campaign before the school-wide vote on Feb. 24.

An important aspect of the campaigns are the election videos, which will be uploaded onto the Carl Monty YouTube page on Feb. 17.

Sophie Clark, a senior and ASB Spirit Supervisor, said, “For videos, it’s best if they’re concise, interesting, and funny. Inevitably it is sort of a popularity competition so if the student body likes you more, they’re more likely to vote for you.”

Since Feb. 13, candidates have been passing out promotional items such as buttons while promoting their campaigns.

Freshman Morgan Yee said, “Campaigning is important because people won’t really care about the candidates if they don’t know them. What’s the point in voting if you don’t know who they are or what they stand for?”

Despite the extensive campaigning by many candidates, some are more hesitant when it comes to participating in the election.

Gloria Capulong, a junior, said, “I don’t really get involved in school elections too much because they seem like they don’t affect me. Personally, I don’t view them as of very high importance.”