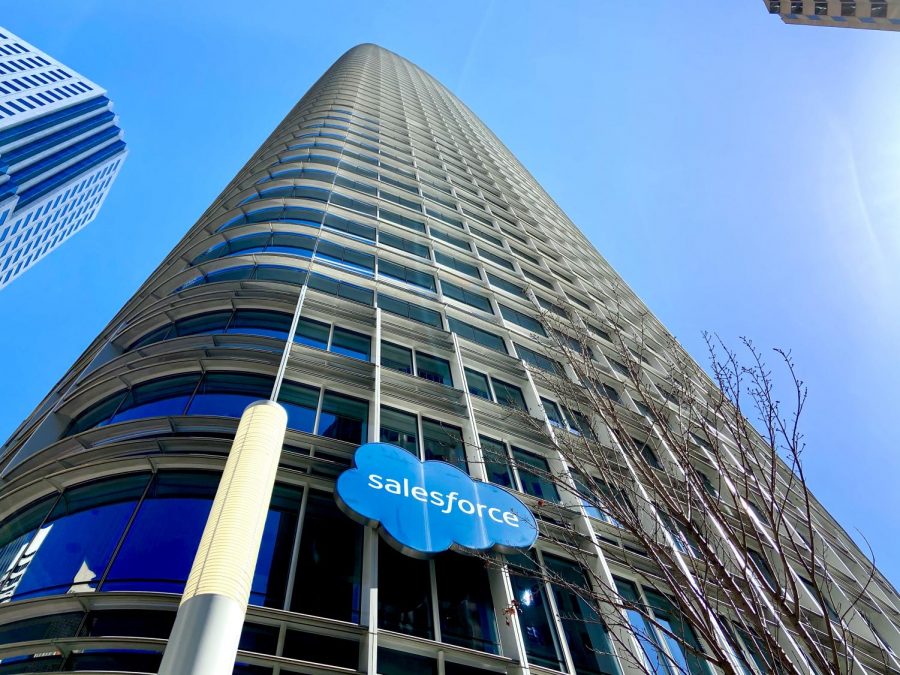 Salesforce is a data base company located in San Francisco, Calif. The Salesforce tower stands at 1070 feet, making it the tallest skyscraper in the Bay Area.

Thirteen percent. That’s it. Although engineering is one of the most rapidly growing industries, it still lacks female representation with only 13% of the industry being comprised of women.

Nicole Yarovoy was 14 years old when she first witnessed the lack of women in the engineering industry. Vadim Yarovoy, her dad, is a senior software architect at Salesforce in San Francisco, Calif. Nicole recalled stepping into her dad’s workspace and was shocked when not a single female was working on that level.

“The only female on his floor was the barista at the cafe,” Yarovoy said.

Yarovoy is currently a sophomore and is part of the Biotechnology Institute, or BTI, program here at Carlmont. At first, Yarovoy was reluctant to join the program.

“Although science has always been my favorite class, I didn’t think I would enjoy the program. But my dad pressured me into joining the program, and I am actually really glad I joined,” Yarovoy said.

Yarovoy feels that joining BTI provided her with exposure to the industry. She had the opportunity to explore a passion she would not have otherwise known about.

She now hopes to pursue biotechnology as a career and believes that she, as well as other females, can positively impact the industry, specifically, in an emotional aspect.

“I think there is still a lack of women in engineering majors because they feel intimidated, but they are still needed because they bring an emotional side into the workforce,” Yarovoy said.

Five years ago, Govani was notified that Carlmont High School needed a computer science teacher. Govani always had an interest in computer science, so she took this as an opportunity to follow a passion.

“Well, they needed someone to do it, and I was excited about it. I have always had an interest in technology, and it is just one of the things you have to learn yourself,” Govani said.

Govani majored in economics and finance but was exposed to the basics of coding through programming courses she was required to take in college. Basing off of prior knowledge, Govani taught herself how to code and ultimately received the position as a computer science teacher.

“It is still a very much heavily male-dominated class. I would say it is probably 75% to 80% boys and 20% girls. But when I first started, I might have had one girl in my class,” Govani said.

She believes the lack of females in engineering is due to the way females are perceived from a young age.

“There is that social bias that probably starts in middle school that girls aren’t as good in math and science, so I think they sometimes aren’t drawn to it or encouraged to do it,” Govani said.

Amisha Nambiar, a sophomore, hopes to change this popular misconception.

With both parents working as software engineers, Nambiar started learning how to code at the age of seven.

“My parents really wanted me to know how to code, and I thought it was fun and interesting to solve problems through codes,” Nambiar said.

This passion led to her starting Coding Club alongside her friend Raina Lahiri, a sophomore. The primary purpose of the club was to educate others on how to code.

“I just hope that we can get more people exposed to what coding really is, and maybe if they are interested in it, take comp sci [computer science] next year and maybe even pursue it in the future,” Nambiar said.

Nambiar, personally, plans to continue computer science as a career and hopes her contribution to the industry will help close the gender gap.

Many companies have also started to acknowledge the gender gap. By welcoming females entering the field with a supportive atmosphere, females don’t feel discouraged by the lack of women representation in the field.

Govani recalls a story regarding her son’s experience as an intern at a software company in southern California.

“Girls get a lot of advantages that boys don’t, and when my son did an internship, he said [girls] really should [do the internship] because they need that sort of extra boost to minimize the gender gap,” Govani said.

Exposing females at a young age to coding can contribute to helping young girls finding a passion for coding early on, ultimately resulting in them wanting to pursue it.

“More and more girls have to keep on signing up for computer science. The industry is really supporting it,” Govani said.