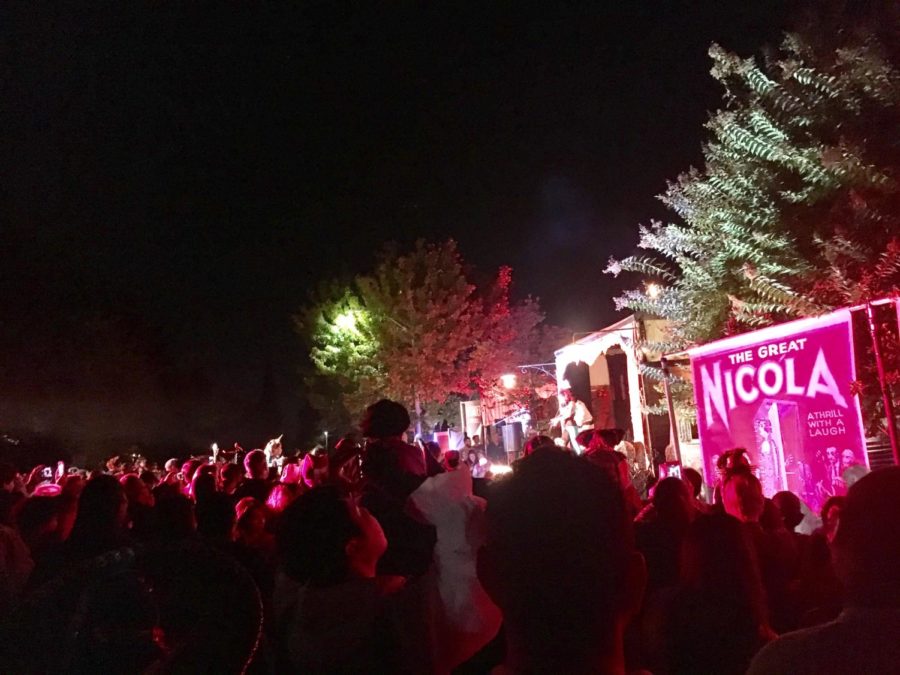 Thousands of people crowd Eucalyptus Avenue to enjoy the festivities.

Thousands of children descended upon Eucalyptus Avenue on Halloween night as they have done for many decades.

While many streets remain quiet on Halloween night, the residents of Eucalyptus Avenue were prepared for an onslaught of trick-or-treaters.

“They put an incredible amount of effort and time into the decorations,” said sophomore Ariella Bacigalupi, a citizen of San Carlos.

Eucalyptus Avenue, located in Southern San Carlos, is a quiet residential street except during Halloween and Christmas.

On Halloween night, almost every household had set up elaborate decorations. One had a stage with performers and music in their front yard. Ghosts, pumpkins, and inflatables illuminated the street.

“We really love the fact that everybody gets to come by and enjoy all the stuff that we did. Already this week there have been people walking their kids by and looking at all the houses which makes us really happy,” said Roxanne, who chose not to reveal her last name.

For most of the residents, the experience of being in the event was positive, but there were a few downsides that came with the responsibility as well.

“There is a lot of traffic, and sometimes it can take a half hour [to get] from the end of the street to your house at night, which when you’re trying to get home from work could be frustrating,” Roxanne said.

Residents buy as many as 3,000 pieces of candy and still run out by the end of the night.

In some cases, the candy ended up costing more than the decorations themselves.

Despite the traffic and the cost, the tradition has survived for many years.

“We have been decorating since 1970 — we used to get set up a lot quicker, but we are getting older now. Now it takes us about three weeks, with four or five hours a day,” said Steve, who chose not to reveal his last name.

The older generation isn’t the only one keeping up the tradition.

Mike, who chose not to reveal his last name, said, “We have kids, and they’re gonna have some really good memories. You always have something to do, and you have awesome neighbors to do it with.”