Everyone wants to know: What does the fox say? 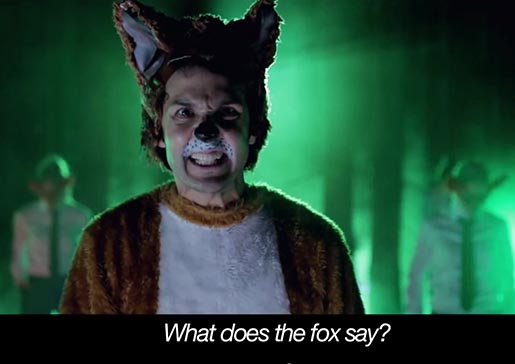 The internet community has found a new thing to obsess over: the “ancient mysteries” of fox sounds. If you haven’t heard of “The Fox” by the Norwegian Duo, Ylvis, you probably will soon.

Recent years have introduced more and more viral videos and songs. Many have either been pure entertainment – or pure annoyance. I consider “The Fox” to be arguably both.

The music video starts out harmless enough – an animal costume party in the middle of the woods, a catchy techno beat begins to play, and finally the singer begins reciting the sounds of common animals.

But all of sudden, the extremely obnoxious chorus: What the fox say? Gering-ding-ding-ding-dingeringeding! Take a listen for yourself: http://www.youtube.com/watch?v=jofNR_WkoCE

The video has already accumulated a whopping 50 million views and counting, thousands of revines and has climbed the iTunes top charts to the number 14 spot, all since Sept. 3, 2013. I know what you’re thinking: Why the fox is this so popular?

It’s lyrical quality is synonymous to other popular tunes such as “Friday” by Rebecca Black and a dance number as catchy as Psy’s “Gangnam Style” – all the components for making a horrible, yet hilarious song into a viral hit.

Anyone can find the hilarity in the song since it was, after all, made as joke for their own Norwegian talk show. The duo’s popularity in the United States even got them an interview on The Ellen Show.

After having listened to it more than once, I found the potential it had to be a great dance song, yet unfortunately the lyrics are almost nauseating.

It has the same satirical value of songs that groups like The Lonely Island produce, except with an idea that’s a lot less relevant.

I can see the song gaining 100’s of millions of views but, like all viral songs, the popularity will simply run dry.

If you like auto tuned animal onomatopoeia, then this song is for you. For the rest of us, let’s hope this won’t be playing on the radio anytime soon.