Explore your creativity in the Art Club 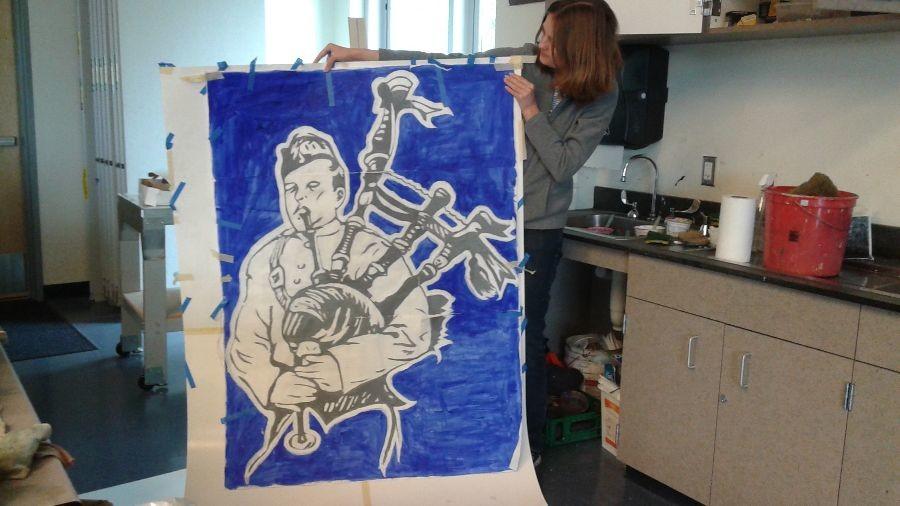 Emily Kelvin displays the stencil of Carlmont's mascot that the art club has been working on.

One doesn’t have to be Pablo Picasso or Vincent Van Gogh to join Carlmont’s Art Club; the only requirement is to be interested in art.

Art Club, run by art teacher Cynthia Hodges, is a great way for students to not only meet other people who are interested in art, but also to get active in the school, which some see as a perk when writing college applications.

Art Club is a not a well-known club, but they’ve completed and are continuing to work on interesting projects that enhance the whole school.

Junior Chelsea Stewart said, “At the beginning of the year, we brainstormed ideas, thought of ways to promote our club, and decided what activities we want to achieve.”

At the Club Fair, Art Club created henna tattoos (Mehndi) for any student who wanted one, free of charge.

At the moment, the club is busy working on a new project.

Senior Emily Kelvin said, “Almost every meeting we work on a stencil for a drawing of the Carlmont logo and mascot.” They plan to hang up their drawing on the side of the Administration building, just as previous art clubs have done.

The club has plans for the future, one of which is to try and go on a field trip to the DeYoung Museum or the Legion of Honor, a great way for art lovers to immerse themselves in all different kinds of art and its history.

Another idea for a club activity is to do projects that are assigned in art classes here at Carlmont.

Stewart said, “At the beginning of the year, we had this idea to do what Art 1 is doing, where we make junk figurines out of miscellaneous items. We are probably going to do that if we have free time after the stencil.”

Art club is very welcoming to all students who want to learn and make art. “Art is a way to escape in your own thoughts and represent yourself in a different way. It’s a stress reliever, and an escape that’s really nice to have,” said Stewart.

Art club meets on Tuesdays in room F-22. Remember, “It’s not too late; even if you don’t have technical skills, you just have to be interested in art,” said Senior Eden Ricci.