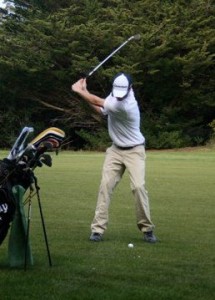 On Tuesday, Mar. 8, the varsity golf team played against Burlingame in their first match of the season at Crystal Spring Golf Course. The weather was a little too windy, but was okay scoring conditions.

By having 12 players on the team, only six players with the lowest scores get to compete in the next match.

Ryan Tierney scored the lowest on the Carlmont team. For the first three holes, he was one over par. He got a birdie on hole four and got back to even par. He finished the round with two over par.

“Our team looks really strong this year,” said Ryan Tierney. “We have a lot of good, new, young players.”

The points were tallied up and Carlmont beat Burlingame with the score of 206 to 217.

“I think if we have the same performance as last week we will do well next week,” stated Tierney.

Next week, Carlmont plays on Monday and Tuesday at Crystal Springs Golf Course and Wednesday at the Burlingame Country Club.