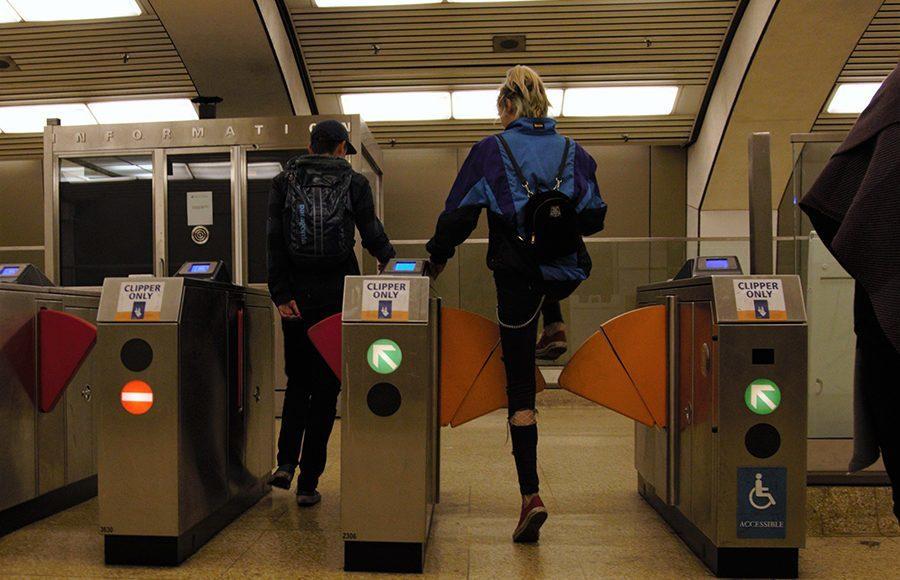 BART riders place their tickets through the ticket machine as they walk through the barriers.

It’s time to go home from work, and the BART station is chaotic. People are running from the ticket station to catch their train. To some, this may seem like the perfect time to skip the ticket line.

It might sound like no big deal, but according to BART Media Relations manager James Allison, “We [BART] estimate that we could be losing $15 to $25 million a year.”

Fare evaders are those who take drastic measures to avoid paying for the price of their BART ticket. John Rowe, a personal finance, business, and math teacher at Carlmont, said, “When people get stopped and issued a ticket, they will just give a fake address and fake name so that the ticket never goes to anybody. Or people will just simply ignore their tickets.”

But this is not news to BART, which has being collecting data about fare evasions for at least two years.

Additionally, those who want to ride for free are likely going to be reluctant to pay for a fare evasion fine. During the months of March and April, BART security officers have ticketed a total of 1,300 people who have attempted to catch a free ride, and less than 9 percent of them have paid their ticket.

Despite their efforts, few remain optimistic about BART’s newest approach. “The BART administration is trying to hire people to stop those who are avoiding paying for their ticket. But it has not been very successful because it is expensive to hire those people, and fare evaders are still finding ways around the hardened system,” Rowe said.

However, some prefer to consider the situation that certain fare evaders may be in. Jordan Rich, a frequent BART rider, said, “There is a handful of people who I think genuinely cannot afford it. And I understand and sympathize and I wish there was a way to help them.”

Ideally, BART would devise a plan that makes sense economically while still enforcing the law.