Fear in the night 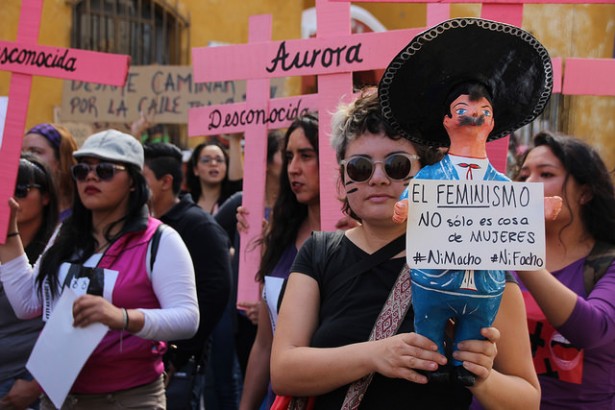 Women march in unity against abuse and femicide in Puebla, Mexico.

There are new incidents that have been occurring daily in the small cities of Mexico, such as Ojo Caliente, Zacatecas.

Women are scared to go outside alone during the nights or even in broad daylight, and it’s not because of the coronavirus; it’s the violence against women. Many of the people in Mexico believe the force against women right now is much more critical than the pandemic.

On March 2o, 2020 and forward, after 9 p.m., women should not be outside in the streets for whatever reason. Although there have been no responses against this claim, there have been alleged threats from the police and incidents where they sexually harass women.

Women have tried speaking out about their assaults by police officers and men around them. There has been no confirmation by either side of the claim. Femicides have occurred more than usual in Mexico, especially in the smaller cities. Some citizens confess what it’s like living in Ojo Caliente.

Ruby Russell*, an inhabitant of Ojo Caliente, said, “My husband thinks he has more rights than I do because he is a man. Women have to be slaves to men. I have to take off his shoes and give him his clothes directly in his hand. If he needs to eat, I have to serve him food.”

Russell has been with her husband for about eight years. She wants to stay by his side but confesses that she is tired of being treated the way she is.

Jessie Adams*, a mother of four in the same city, often takes care of her parents who are elderly.

She said, “I am afraid of going out to take care of my parents who are already elderly. Ojo Caliente police have threatened women with groping them if they find them at night on the street. All the women know about it here, but the police do not want to comment on it, and they continue denying it, and the women live in great fear.”

Adams also noted that some girls went missing but chose not to say more because of the dangers that are out there.

Rayne Andrews*, who lives around the same area, said, “There are many dangers in Mexico, and it is the reason I do not want to let my daughter go outside alone. I want someone to always be with her; if you don’t take yourself away, no one will take you away.”

His daughter is in high school but always goes to school with a family member or a group of friends, precautions taken out of fear.

Natalie Simmons*, a woman who has family in Mexico but lives in the Bay Area, expresses the way she feels when she talks with her relatives from Mexico.

Simmons said, “I feel powerless not being able to do anything. It is an injustice that this happens with women, who are the basis of a family. I can’t believe men abuse, wanting to overstep on our rights, not knowing that they were born of a woman. I don’t know what I’m angrier with, the virus or the men. I can protect myself from the virus by taking precautions. But how am I going to protect myself from abusive men?”

With the fear that lingers through the small cities of Mexico, there are also people who want to make the situation better and help others. Some organizations, like Feminism, offer help and support to women in any situation they are in.

*Due to the sensitive nature of the content, these names have been changed to protect the anonymity of the source.