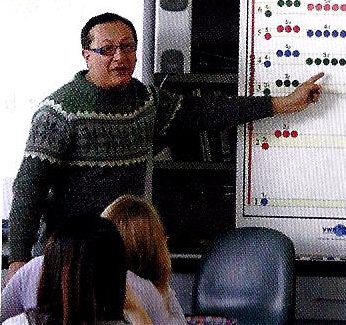 Image from the 2012 Carlmont Year Book

For  the majority of his life,  Carlmont chemistry teacher Felix Guzman resided in a country 2,820 miles away from his current home. After many years of living in his home country Guatemala, Guzman decided it was time for a change and came to the United States for better opportunities.

Guzman grew up and attended school in Guatemala City until he received a degree in chemistry. As a result, Guzman was able to secure a job with one of the world’s most famous pharmaceutical companies: Bayer Pharmaceuticals.

After working there for a number of years, Guzman decided to leave Guatemala to attend graduate school in America.

“In 1988 I attended Virginia Tech University, but [my] main reason for coming to America was to get a better chance at economic opportunities,” said Guzman.

Not only did Guzman receive his masters in chemistry during his college career, but he also discovered an interest for teaching.

“I was a teacher’s assistant in my third year of college and I really enjoyed it. Some people in the class also said that I was good at it, so then I decided I was interested in being a teacher,” said Guzman.

After attending numerous schools in both America and Guatemala, Guzman was able to distinguish the significant differences between the two countries.

“It is much safer here in America because there is less poverty and less crime. Also, the job opportunities are much more available and the general living standard is better.”

Despite his praise for America, Guzman misses many things about the home he grew up in.

“I really miss the friendly people in Guatemala and my whole family. They all still live there and I am the only one who currently lives in America. However, I go back to Guatemala to visit them frequently.”

Many students of Guzman recognize the courage it took to come America and greatly appreciate his determination to learn the culture and become a teacher.

“It’s really admirable that he could leave his home and family to pursue his career in America by himself. It’s also impressive that he has embraced America and its culture so much,” said Amanda Breslauer, a junior and student of Guzman.

Junior Brian Palma also affirms that Guzman’s move to the United States was worthwhile and his teaching has personally affected him.

“Mr. Guzman is a really swell guy and he always wants to make his students laugh. I think it’s awesome that he’s learning American culture and he’s around to teach the chemistry kids,” Palma stated.