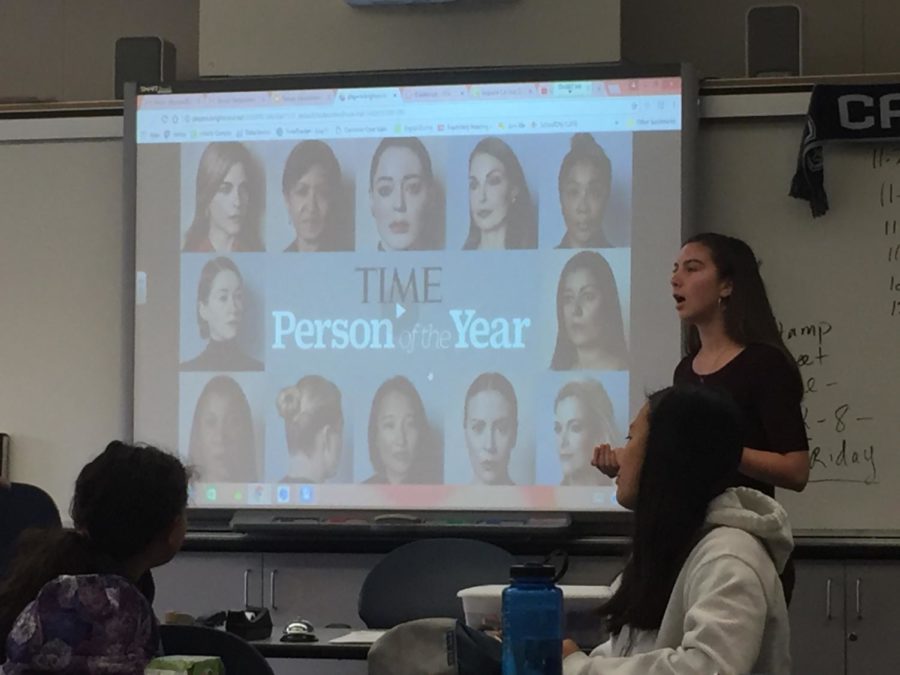 Walking into D-8 on Friday, Dec. 8, chairs are arranged in a large circle as Feminist Club gathers to discuss one of the most controversial topics of 2017: sexual harassment.

At the beginning of the meeting, Isabel Harnett, a senior and the president of Feminist Club, played Time Magazine’s video about The Silence Breakers, who are men and women that came forward with their stories of sexual harassment this year. Everyone in the video is from different backgrounds and creeds, but they all have one thing in common: they all spoke up about their sexual harassment.

“Seeing how all these different women, some of them from very high positions, all talk about the different aspects of sexual harassment makes me very emotional,” said Harnett.

The discussion began by specifying the need for education on sexual harassment to begin at a younger age and for it to address everyone who may be affected, not just girls.

“It doesn’t just affect certain people, it affects everyone around you,” said sophomore Azucena Duran, the vice president of Feminist Club. “It’s important to talk about this at a younger age and to have integrated talks so that both boys and girls can be aware of this.”

Sexual harassment does not always occur in the form of rape or physical abuse. Other forms of sexual harassment include verbal abuse, such as catcalling or unwanted compliments, some of which draw from the portrayal of women in media and popular culture.

The discussion also addressed the presence of objectification and derogatory lyrics in rap music and how it plays into the norm and consumer expectation.

“I was reading about musician Amber Rose and her rapper boyfriend and how she was trying to educate him on feminist topics and how he was trying to be less offensive with his lyrics,” said Harnett. “But at the same time, he says, ‘Oh, I still kind of have to say those things because that’s what my audience wants; that’s what they expect.'”

The conversation also shifted to examine the causes of sexual harassment, which explored the topic of the values instilled in boys and girls at home.

“We shouldn’t just have to tell women to be careful. We should also be telling men to respect women,” said Heather Pritchard, a senior and the club’s social media coordinator.

Oftentimes, men who speak out on sexual harassment tend to use the lines “as the father of a daughter” or “as the son of a mother” to address how it affects them, but the conversation examines the problems with this reasoning.

“You shouldn’t just feel insulted when a woman is sexually harassed because you’re related to a female,” said Pritchard. “You should be insulted because the person being harassed is a human. A human being degraded.”