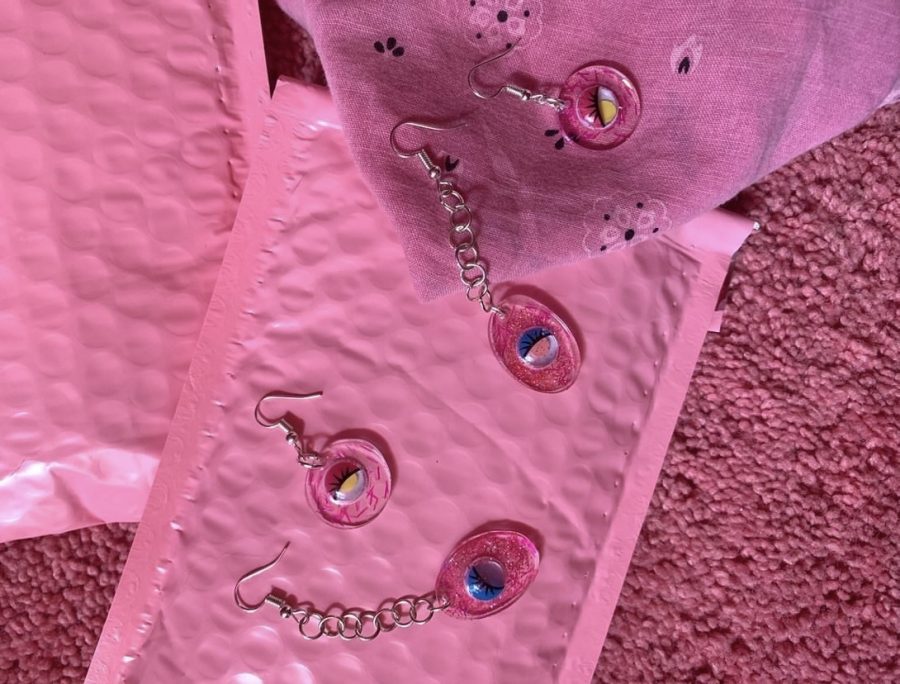 Sadie Scott and Kyra Slattery create and lay out earrings for their business, Femme Fatale.

All good things start from somewhere. That’s what Sadie Scott and Kyra Slattery like to think. The two are co-owners of Femme Fatale SF, an ever-evolving jewelry company that started from a sparkly hot pink cardboard box.

Scott situated herself on Pier 39 in San Francisco on July 4, 2019, accompanied by the box she had purchased from a local art store. She started selling earrings she had made that day for $8 a piece.

“Only like three people bought my earrings, and I ended up basically giving them away,” Scott said. “I was like, okay, please, how about $4 for a pair of earrings? I just wanted people to like them and to wear them and to enjoy them so much.”

This earnestness is something unique that Scott and Slattery bring to the table. Profit was never much of a motivation for the pair.

Their Do Good, Look Good philosophy is an example of the duo’s efforts to use their platform for good. Scott and Slattery create charity-based earrings to donate profits to relevant causes making a difference.

Previous organizations include Black Youth Project 100 and Youth BreakOUT!, and they constantly look for more causes to support.

“We have a following, and obviously, if we’re making money, we can donate that too causes who are making a difference, and that’s great,” Slattery said. “That’s really productive, and it makes us feel better, and it makes the difference.”

The two not only leave big shoes to fill with their ethical-mindedness but also reduce their carbon footprint by pushing a sustainability-based agenda.

In line with respecting Mother Nature, both their jewelry and packaging are made from recycled materials, right down to the tape. But they’re also tackling environmental friendliness in a way most businesses cannot claim the same of.

Making their earrings small-batch allows the two to continue being more eco-friendly; instead of letting hundreds of earrings collect to dust, their jewelry is on a made-to-order basis, so each piece is customized and fresh.

Their do-good measures aren’t the only thing unique about this brand. Their name also warrants some conversation. It plays on the well-known phrase “femme fatale,” an archetype that sparks much controversy.

A “femme fatale” is known as a woman who uses manipulation and seduction to her advantage. The term’s misogynistic implications did nothing to scare the pair away. Instead, they chose to spin a new narrative around it: one of female empowerment.

The two-place importance on empowerment and confidence in sexuality for women, regardless of how that manifests in each individual.

“Being a woman who uses her own femininity and her own power, almost like a goddess, that can mean so many different things for so many people,” Scott said. “We want people to find their inner femininity, whatever that looks like for them.”

Femininity is often associated with delicacy, beauty, submissiveness, and perfection. But this narrative can be damaging by wrongfully depicting the concept, leaving unattainable standards in its wake. Moreover, the societal norms forced upon women all play into the idea of the male gaze.

“That’s what I think I hate most about this sort of mainstream feminism that we have fallen under in the patriarchy,” Luiza Nunes, a sophomore, said. “It always seems to center around men’s opinions of us, how we should act, and specifically how we should look.”

Though the subjugation of women may not be the central dynamic of the patriarchy, rooted at its core are deeply misogynistic exchanges. With it intact, women are constantly a victim of over-sexualization and objectification. The pressure to conform to sexualized natures is only amplified in a patriarchal culture.

Equating a woman’s worth to her body’s appearance and its sexual services perpetuates a toxic cycle.

“We wanted to break away from that,” Slattery said. “We want people to wear our earrings because they want to look pretty and do it for themselves, not for anybody else.”

The duo intends for their business to push the idea that beauty is not a standard to strive for, but rather, the confidence from feeling one’s best. It operates on the basis that feeling confident in the face of societal pressures trumps feeling inadequate.

By using individuality in beauty and fashion, more women can keep confidence and self-assuredness. Their beauty is amplified by their uniqueness. Slattery and Scott wholeheartedly support more women feeling confident, especially if they’re rocking their designs.

“We want people to be the best versions of themselves and have these earrings to be a reminder of that boldness and that beauty that’s in femininity,” Scott said.