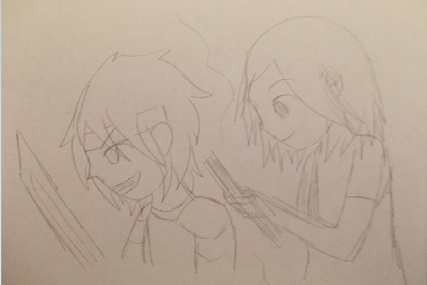 People often insert themselves into fiction, which allows them to strongly identity with fictional characters.

You stand in front of your enemy, adrenaline powering your every move, ready for the final confrontation, or so you think. You let your eyes drift from the screen back to reality where your homework lies untouched.

The images and words all seem real, as if one could reach out and touch it. However, it is not quite reality, as it is separated by paper or a screen.

Fiction has long been a medium for spreading ideas and opinions in an indirect way to the audience. People are more likely to adopt beliefs they read about rather than beliefs they directly hear from rants.

According to Yale professor Tamar Gendler, there are two cognitive systems at work when we engage in fiction: belief, which affirms that fiction is false, and alief, which creates emotional connections with fiction.

Despite fiction being separate from real life, people emotionally invest themselves in them. It can greatly influence their own opinions just by portraying topics and issues in a positive way.

In a study done by Ohio State University, people who identified with a character would have their personality impacted. For example, a character who struggled to vote made it more likely for the readers to vote days later, and characters who identify as non-heterosexual causing greater acceptance in viewers.

People naturally insert themselves into fiction. As a result, morals and lessons within the fictional works affect the audience who are immersed in it.

Fictional works can even bring people closer to reality and make them care more for real life. YouTuber TamashiiHiroka found her self-worth through the fictional series Pokemon. She began her channel as an escape from her miserable life, but as she continued her videos, she found confidence and self-love because of Pokemon.

Fictional characters and worlds has become a medium that people can identify with and be absorbed in, which has been a strong method to spread important ideas and encouragement.