Finals cause extra stress for students in language classes 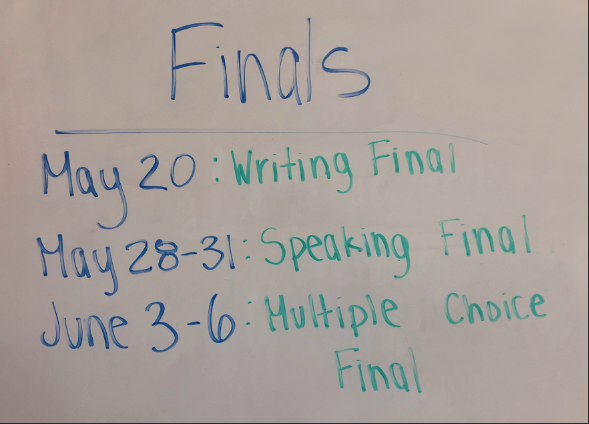 The dates of the Spanish II finals are posted in a classroom.

Although finals week is approaching fast, exams for the different language classes have already begun.

In most classes, teachers administer only one or two finals in the two hour period. This can include multiple choice, short answer, essay finals, and so on.

However, the language classes at Carlmont all have different finals spanning over several weeks.

The three languages offered at Carlmont include Spanish, French, and Chinese. Each language track contains different class levels for students, but almost all of them require taking more than one final.

Spanish specifically has three finals; the written exam takes place two weeks before finals week and consists of a paragraph written in response to a specified prompt. The speaking final takes place during review week in which the teacher asks the student pre-written questions that the student must answer. The multiple choice final occurs during the two-hour period during finals week.

Many students find that because of the numerous final exams, preparing for language finals can be more difficult compared to their other classes.

“I have to study way more for Spanish because of the three finals,” said Megan Bhatt, a sophomore in Spanish II. “Since you have a final every week, it’s like continuous studying.”

Others think that while they are time consuming, the language finals accurately showcase students’ abilities.

“I think having the three finals really tests students and makes sure they show how much they have learned. However, I find it very stressful to be prepared for everything,” said Emma Weitz, a sophomore in French II.

Although Spanish and French finals follow similar layouts, Chinese does not. For students taking Chinese, their final has an additional culture portion that students are expected to study for.

“I feel like I have three extra finals separate from my other classes,” said Ashlyn Kwan, a sophomore in Chinese II. “They’re all different topics and skill sets, which just makes me have to study more.”

Some students find having three different finals to be stressful. However, many understand the reasoning behind multiple finals.

“I understand having the different finals for the academic part since they’re designed to show our understanding of different topics and the different skills we have learned. However, it’s still hard because of all the studying,” said Dominique Veinstein, a sophomore in Spanish III Honors.

Teachers often use finals as a way to test the overall knowledge of their students. Finals are also used to emphasize that a combination of speaking, reading comprehension, and overall understanding of grammar rules or vocabulary is important.

However, many teachers understand that students have other classes to study for, which is why they space out their finals over a span of three weeks.

Ultimately, although studying for multiple finals can be stressful for students, it demonstrates all that they have learned throughout the year.