Finding beauty in the ashes 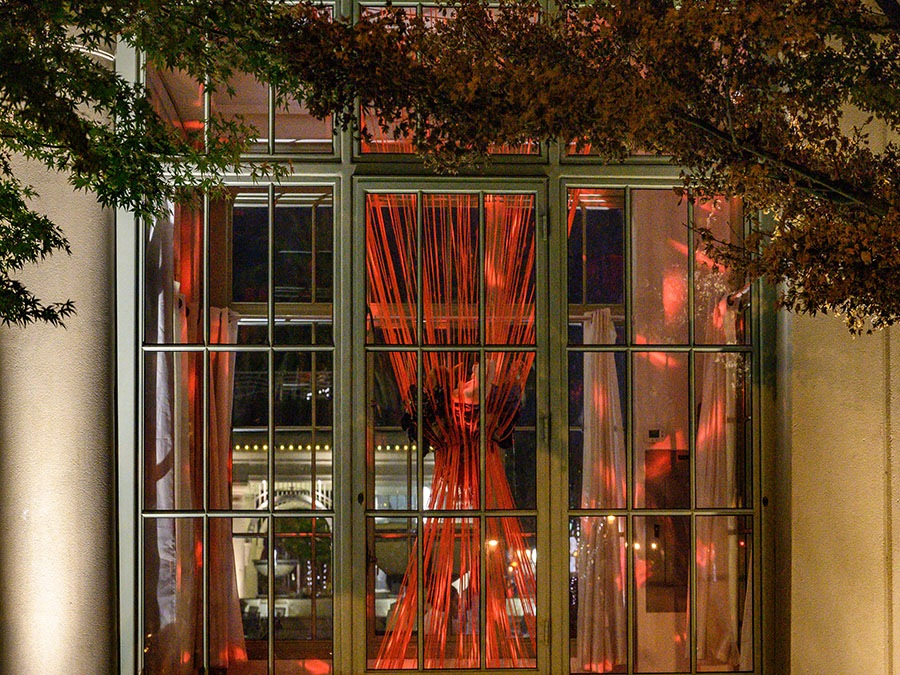 The art installation stands in the darkness as the red lights shine upon it.

Spurred on by the recent fires that devastated many California communities, local residents banded together to install an art piece in the Redwood City Art Kiosk. Titled “Bonds Unburnt,” the piece embodies people’s connections with others concerning the tragic California wildfires.

Devoted to portraying art with meaning and relevance, a monthly exhibit is unveiled in the kiosk for the public to enjoy. Each is a product of a local Bay Area artist, according to Lance Fung, the chief curator of Fung Collaboratives.

“Every month, we have different art exhibits, and it always holds a message. I appreciate contemporary art with a story that evokes emotion, so it’s amazing to have this in Redwood City,” said Chris Beth, a member of the Redwood City Parks’ Recreation and Community Services.

For this specific work, artists Jose Castillo, Peter Moen, and Tiffany Seav aimed to express their reaction to the Camp and Mendocino Fires that occurred last year. They created the piece as a way to honor those affected by these tragedies.

“When I was young, I wasn’t aware of the fires, and I wasn’t educated about the situation until recently … I just hope that everyone is okay,” Seav said.

On Nov. 16, Redwood City community members and avid art appreciators gathered in front of the kiosk to wait for the official opening.

The Redwood City Improvement Association introduced the piece to the crowd, alongside Fung Collaboratives who managed the project. They spoke about the meaning behind the work and celebrated finishing the first year of kiosk’s installations.

“The art installations are meant to inspire discovery and mentorship, along with spreading awareness of unique, important messages. Each project is thought-provoking and takes risks,” said Lance Fung, an organizer of the exhibit.

After the speech, the doors finally opened as citizens walked into the venue to view it from up close. From the moment they stepped inside, people felt the impact of the artwork as they carefully observed each aspect of the piece.

The orange ropes combined with the Japanese philosophy known as the “red string of fate,” symbolize the fires and the connections between California’s many communities.

“We wanted to create something about the connections that we have with people going through trauma,” Moen said.

In the center of the artwork, these ropes hold examples of personal items donated to those harmed by the fires. The items include donations from Redwood City residents and sentimental items from the artists.

Groups of various candles were spread out across the floor and as they burned, the smell of wood lingered in the air, invoking a dynamic atmosphere for everyone inside. Alongside the candles lay pieces of charred wood.

“The wood at the bottom of the piece was transported from the Rim fire site back in 2013, which fortunately witnessed no deaths,” Moen said.

Although all lives were spared from the Rim fire in Yosemite, its impact was seen for hundreds of miles.

It seems that each aspect works in harmony, ultimately forming the impactful piece of art that makes up “Bonds Unburnt.”

Along with creating an engaging environment, the art seemed to urge readers to view the fires from a different perspective.

“We are lucky not to have a true relationship with the fires. We’re honestly very fortunate not to live too close to them,” said Anuradha Kolhatkar, a viewer of the work.

As the sun slowly crept down over the art, the opening event came to an end. “Bonds Unburnt,” which embodies creation from devastation, brought the art community together for one last time in 2019.