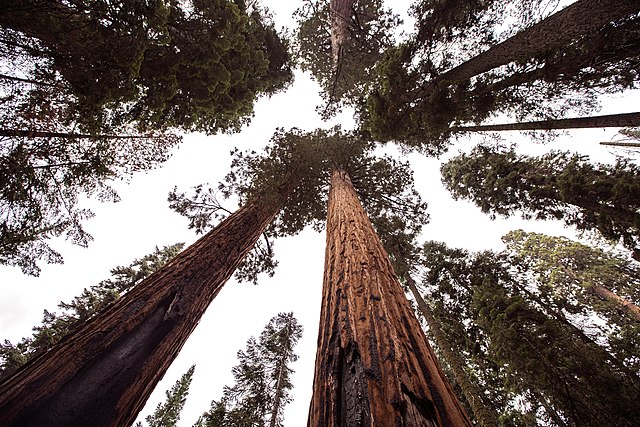 Trees in Sequoia National Park are unscathed despite nearby fires.

After suffering through many years of fires, the ecosystems of northern California are devastated. Losing the sequoia trees would be an especially harsh blow.

Carlmont student Aran O’Sullivan is a junior and the vice-president of the Green Team club. He describes the sequoia trees as a keystone species in the northern ecosystems.

“The sequoias provide habitat, nutrients, soil stability, as well as other ecological services, such as carbon sequestration and the release of oxygen into the atmosphere. If these trees were destroyed, the entire ecosystem would be negatively impacted, or possibly even collapse as a result,” O’Sullivan said.

Sequoia trees are also a species exclusive to the coast of California. Their destruction by the fire would mean extinction.

Not only would this crush northern California ecosystems, but it would eradicate a national park enjoyed by many, preventing future generations from seeing natural wonders like General Sherman.

Fortunately, the firefighters have managed to prevent damage to the park for an entire two weeks. Much of the success is attributed to the park’s well-maintained paths and the prescribed burns performed by the National Park Service.

Carlmont Biology and AP Environmental Science teacher Michael O’Neall is very confident in the firefighters’ ability to prevent damage to the park.

“At least at Giant’s Forest, I have complete confidence that there will be little to no damage to the sequoias.  They regularly do prescribed burns and are taking efforts to protect the sequoias as the fires spread. Other areas in Sequoia National Park may be more vulnerable to the fires but I don’t expect the damage to be too extensive,” O’Neall said.

The suppression of the fire and protection of the national park have shown the viability of well-maintained paths and prescribed burns as methods of preventing fires in California in the future.

O’Sullivan believes that is not enough. While these might help suppress fires, they don’t deal with the root of the problem.

“People need to recognize that they have the power to impact change. Don’t give way to complacency and despair, research ways you can help combat climate change and take action!” O’Sullivan said.