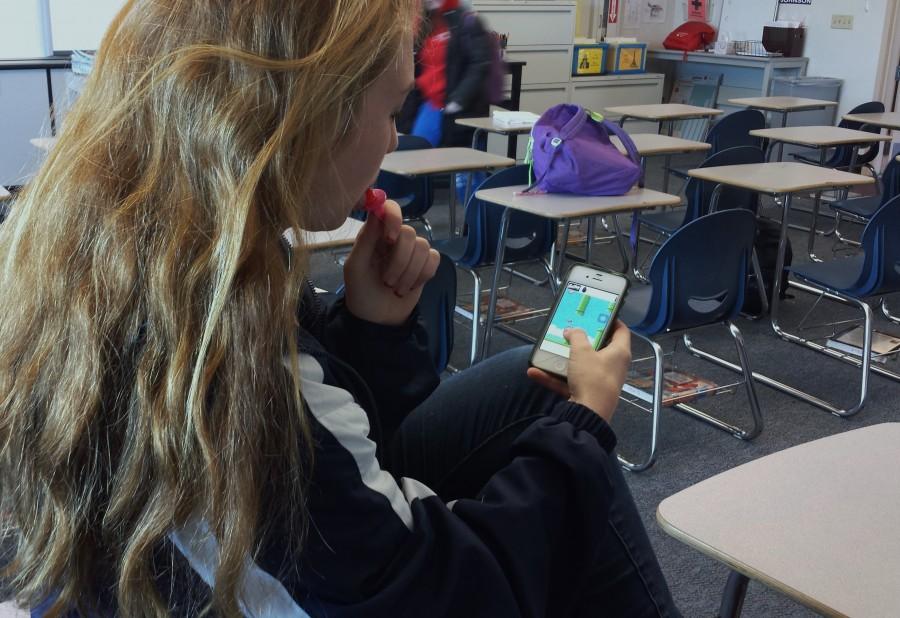 Carlmont students get addicted to the frustrating game of Flappy Bird.

This opinion, shared by sophomore Sam Levy, is a common one among Carlmont students. The subject of this sentiment is a phone app titled Flappy Bird.

Flappy Bird has well over 5 million downloads, a firm 4.0 rating, and the title of number one free game on both the App Store and Google Play Store. Its App Store reviews are riddled with titles like “Painfully Addicting,” “Pure Evil (yet addicting),” “the death of me,” and “Why you no fly straight! [sic]”

The game consists solely of tapping the device’s screen to guide a small bird through a series of gaps in pipes. It seems like it should be very simple, which is the main reason why it frustrates so many people when they try to play.

At first, many people find it impossible to get past one or two pipes. The bird will sink like a stone with the slightest collision against a pipe edge, immediately ending the game. “My highest score is about three,” said freshman Hana Hogan. “It’s the stupidest game ever. I don’t get why it’s so popular.”

The reviews on the game stores aren’t the only place where people are venting about the app. Twitter and Facebook feeds have been filled with statuses complaining about the difficulty level or boasting a new high score. Sophomore Angelo Zhao posted his new score on Facebook, saying, “54 on flappy bird! I feel alive again!!! [sic]”

The art is very pixely, and only consists of a sky, cityscape, green pipes, and the bird. “The graphics are pretty bad and there’s no music,” said junior Austin Driver. “They’re not even that original. The first thing I thought when I saw it was that it looked exactly like Super Mario.”

There is no music; the only three sounds in the game are the whooshing sounds of the bird’s wings with every tap, a dinging noise with every pipe passed, and the sound effect of a punch with every loss.

Yet, despite the simplicity of the objective, controls, graphics, and sound, it has captured the attention of millions.

“When you walk through the halls at school, you’ll see at least one person playing Flappy Bird,” said Hogan.

Sophomore Colleen Castro said, “I told myself I’m not going to get it, but in reality I probably will eventually. Everyone is obsessed with it, and I just don’t have enough time to be that obsessed with an app.”

Nobody really knows why the app has suddenly boomed in popularity. It was released on May 24, 2013 by Vietnamese developer Dong Nguyen of dotGears Studios, yet it took seven months before it suddenly soared to the top of the app rankings.

“It’s addictive because it’s really difficult and once you get your high score you can’t reach it again for another three hours,” said sophomore Monica Carrasco. “The graphics aren’t the point of the game, and I usually have the sound off anyway.”

According to Carrasco, the appeal of the game stems from “the fact that it’s so hard and you just want to keep beating your score.”

Despite the mutual frustration of the masses with Flappy Bird, its popularity is evident throughout the halls of Carlmont and the phone screens of millions.