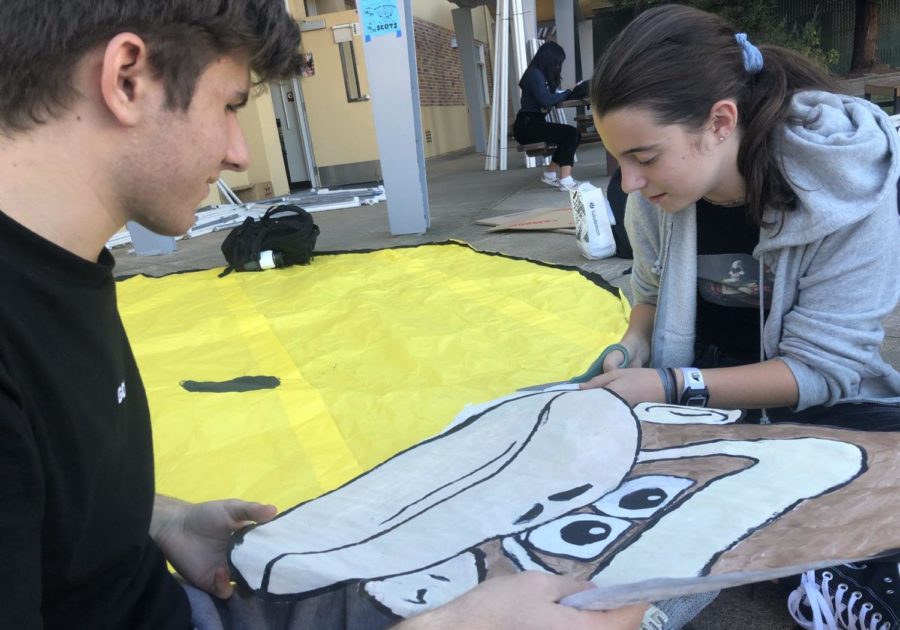 Dozens of students gathered after school to decorate the vivacious floats that were showcased in the homecoming football game on Friday.

While students decorated floats, sophomore class president Jono Sison burst out of the ASB room, dancing, yelling, and bringing a smile to the faces of everyone who attended the float decorations, causing a sense of school spirit to sweep through the students.

Decorations for the homecoming float were held all week after school in the quad, with each grade designing their own to be presented at the homecoming game. Class presidents and ASB members were scattered throughout the area working on various projects.

“[Sison] creates that bond inside and outside of school, which makes a great environment for people to participate and feel welcome,” said Riley Baum, a  sophomore.

Sison has been class president for both of his years at Carlmont so far, and organizing events like the float decorations have become second nature to him. Each grade has a theme for the floats, and this year’s sophomores based theirs on retro video games. The floats are essential to class unity because of school spirit students feel and radiate when they are revealed.

Students who attended agreed that the most enjoyable part of the decorations was the time they spent creating the floats. The experiences that they went through brought everyone closer together and strengthened the school community.

Class presidents are often attributed to the success of the floats, but Sison had only praise for his sophomore class.

“One of the things our class does well is class unity. We’re always together, we do things together, and we enjoy our experiences around each other. And if you just look around us right now, there are people enjoying each other’s company and having fun,” Sison said.

ASB Adviser Jim Kelly firmly believes that Sison and the sophomore vice president, Nate Hsich, bring the class together with their enthusiasm.

“I think they’re doing a phenomenal job. It’s really cool to see how they’re working together to function as one unit instead of competing with each other and the other classes,” Kelly said.

Though not everyone participates in the festivities, those who do feel that these events create a welcoming environment for all.

“I like to participate in the school activities, and part of that is the really good group of friends you make along the way,” Baum said.

Each class president has found a way to create fun and engaging activities for students to participate in, with homecoming float decorations being just one of the events, despite minor issues they may encounter.

While an outsider looking in would be impressed by the design of the floats, everyone who participated will remember the fun times and school spirit they felt while designing them.