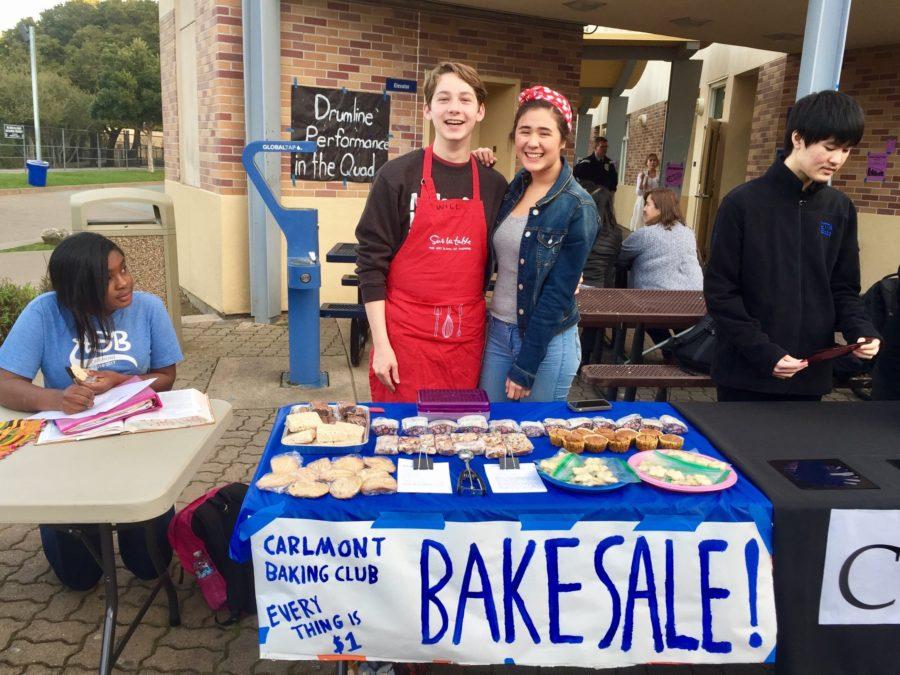 Sophomores Will Nadan and Jade Margolis sell a variety of baked goods to fundraise for their club at Open House.

Food is the key to the heart, as seen by the many students and parents that attended the Open House Clubs Fair last week.

On Thursday, March 16, Carlmont held an Open House for prospective parents and students, as well as current families to look at classes. This year, however, had a twist — during Open House, a Clubs Fair was held in the quad. Over 15 clubs and groups participated, making it one of the most successful Open Houses yet.

Along with a taco truck, many clubs, such as Filipino Club, Christian Club, and Baking Club, sold food.

Sophomore Will Nadan, president of Baking Club said, “We sold all sorts of things from lemon bars and mint Oreo brownies to shortbread and gluten-free pumpkin muffins, and I believe we were the only club to sell something homemade which interested some people at Open House.”

Many clubs participated in raising money for activities and spreading awareness to recruit more members.

Sophomore and vice president of Baking Club Jade Margolis said, “We decided to participate in the clubs fair because firstly, it is a great chance to get exposure and meet new people and secondly, to raise money for future activities like outreach programs.”

Planning and organizing the clubs and their booths was an intense effort for ASB’s Clubs and Culture Commission.

Sophomore and Clubs and Culture Commissioner Kaylie Moropoulos said, “[The Clubs Fair] took several weeks to plan, but a lot of that time was spent waiting between correspondences with clubs and others.”

Getting clubs involved in the Fair was simple.

“Clubs signed up through forms they turned into the ASB room; however, many clubs simply reached out to our commission for help getting involved,” said Moropoulos.

Organizing the booths was also a tedious process taken on by the clubs.

Nadan said, “To plan our booth, we created a sign-up for people to bring in things to bake. After many obstacles and changes of plans, we ended up with six people participating in bringing in treats to sell.”

The efforts did not go without notice and the struggles without praise.

Sophomore Clara Vltavsky, who attended the Clubs Fair and Open House said, “[The Clubs Fair] was really great; I had a lot of fun with my friends. The music and set up made it inviting and all the food was really good, they even had some for us vegans!”

Thanks to the hard work and tasty treats provided by the clubs that participated, the Open House Clubs Fair was a success.

Nadan said, “We ended up with a very successful bake sale and got the word out to more people about our club. It wasn’t easy preparing everything, but we learned that lots of hard work really does pay off.”