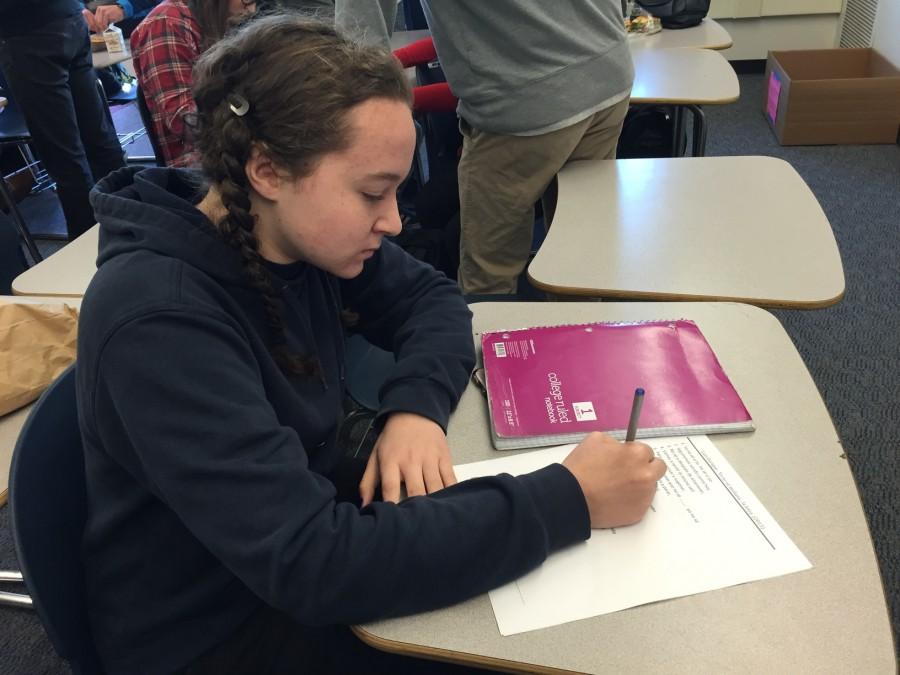 Sophomore Isabel Mayoss studies for the National Exam so that she can receive a gold medal.

Carlmont students were able to compete with other foreign language speakers during the month of March.

These tests are both contain four sections: reading, listening, grammar, and vocabulary.

Across the United States, students take the exams to see how they measure up against other students learning the same curriculum.

Getting a high score comes with an incentive: the top scorers receive a gold, silver, or bronze medal, which will be delivered to Carlmont in May.

Many students have been preparing for the exam in their classrooms for weeks.

Sophomore Clara Butler, who takes French III Honors, said, “We took a lot of the tests from previous years, and went over the answers in class in order to prepare.”

In Spanish III Honors, the exam preparation was similar.

“In class, we did practice tests from the exams of previous years, and on my own I studied Quizlet flashcards,” said sophomore Sofia Tam.

After the test, many French III Honors students felt that the test was more difficult than they anticipated.

“I thought it was harder than expected compared to all of the practice we had done, so in turn, a lot of it ended up being guesswork,” said Butler.

On the other hand, sophomore Sehar Masud felt that the Spanish National Exam was easier than she had expected.

“It was actually a lot easier than I expected because there was a lot of pressure building up to the test, but [Spanish teacher Roberta Scott] prepared us for it pretty well,” said Masud.

Though the test may have had some downfalls, many felt that it benefited their language skills overall.

Carlmont will have to wait until May to see how its students measure up against other schools. Until then, students will have to anxiously await their awards.