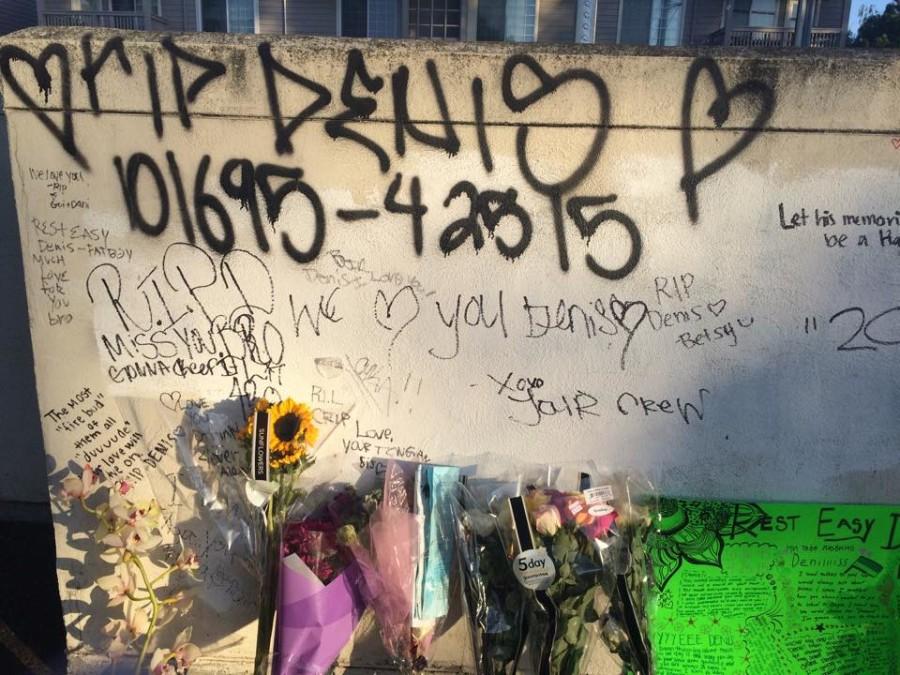 Meshchyshyn's friends and family write heartfelt messages on the wall of the parking lot where he was stabbed.

According to the Belmont Police report, two friends of Meshchyshyn went to the parking lot behind Wendy’s to meet him, and saw him fighting with the unknown suspect. As the two friends approached Meshchyshyn, the suspect ran away. Initially, the gender and age of the suspect were unknown.

Upon arrival, the two friends saw Meshchyshyn suffering from stab wounds, according to the police report. Belmont Fire Department paramedics treated him at the scene and transported him to a hospital where he was pronounced dead.

After less than one week of investigation, Belmont Police investigators arrested Timothy Andrew Guerra on April 29, according to the police report. Guerra is charged for Meshchyshyn’s murder and is currently in Stanislaus County Jail.

Anthony Fischetti, a senior who worked with Meshchyshyn, said, “He was one of the happiest guys I’ve met. He could light up a room. In the three or four years I’ve known Denis, I don’t think I ever saw him mad. He tried to make good out of every bad situation. It’s terrible. I miss him.”

Meshchyshyn worked at Pump it Up, a children’s inflatable party place,  where he became close to many of his co-workers.

“He doesn’t seem to worry about anything. He never stressed about [the parties at Pump it Up]. He would just wing it and create something really fun for the kids, and I liked how he was able to do that,” said Evan Lee, a junior who also worked with Meshchyshyn.

Meshchyshyn’s friends and family are reaching out in many ways to honor and celebrate his life.

In less than three days, an online campaign has raised over $14,000 from nearly 200 different donors to go toward Meshchyshyn’s funeral costs.

Meshchyshyn’s friend James Mijares released a song, on April 28, in memory of him.

“Me being an artist and Denis being one of my really good friends, I feel like making a tribute song was the least I could do. I will be honest, writing and recording that song was not easy, but it was mandatory. That was something that I had to do. Denis will be missed forever,” said Mijares.

On April 26, friends and family of Meshchyshyn honored his life by holding a candlelight vigil and bringing photographs, flowers, and candles to place at a memorial behind Wendy’s.

“The candlelight vigil was super nice. Around 150 people showed up just for him, and his parents were there, and they loved it. It was probably the saddest thing I’ve been to in a while. I can’t even describe it,” said Fischetti.

“It was emotional, seeing the staff so distraught, but it was good because there were so many people,” said Lee.

His family and friends continue to visit the memorial; they come together to support one another and remember the memories they shared with Meshchyshyn.