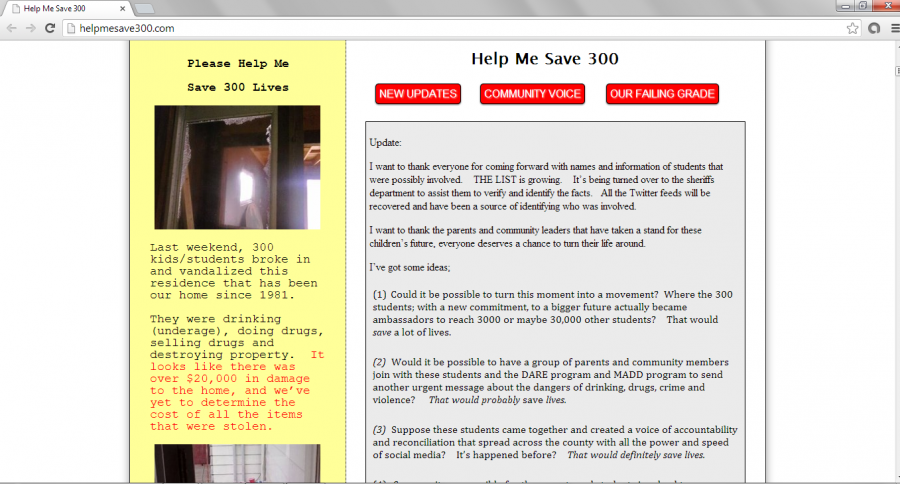 The website Brian Holloway set up to identify the list of the 300 partygoers and provide information about the event and how to help is located at helpmesave300.com

On Labor Day weekend, ex-NFL player Brian Holloway was shocked to find that 300 Stephenstown, N.Y. teenagers had held a destructive party in his house while he was away. Instead of pressing charges, his first action was to reach out to the partygoers via social media.

Holloway was in Florida when his son noticed news of the party on his Twitter feed. Many of the teens had posted numerous statuses and pictures of the party on Twitter and Instagram, information which is now being used to identify the 300 in attendance.

On Holloway’s website about the event, helpmesave300.com, he stated, “300 kids/students broke in and vandalized this residence that has been our home since 1981. They were drinking (underage), doing drugs, selling drugs and destroying property.  It looks like there was over $20,000 in damage to the home…”

Holloway’s main concern, though, was the stark lack of remorse and responsibility the teens took in their actions. His goal is to turn this event into a movement to educate about teenage partying, underage drinking, and consequences of such irresponsibility.

On Sept. 18, Carlmont had an assembly featuring Devin Wyman, another NFL player who had his own story to tell to motivate teenagers. Many students including sophomores Clara Romani and Gaby Belardi agreed that his presentation was inspiring.

“It was good to see an example of someone who had a bad past turn his life around, succeed, and go on to motivate others,” said Romani.

Belardi agreed, saying that “it was great for everyone to see that even if bad things happen to you, there can be second chances.”

Holloway is currently continuing to identify the 300, receiving both praise and malicious responses for his attempts to hold the students accountable for their actions and teach a lesson of responsibility.

People like Holloway and Wyman are sources of inspiring behavior and perseverance to students who are growing into their personalities and morals. To students such as the lawbreakers at the Stephenstown party as well as average kids who need guidance, their advice and experience can change lives.

“Moments can be turned into movement… And with all this effort, energy and work, if we were only able to save one life – would that be worth it?” reads Holloway’s website. “Of course it would.”