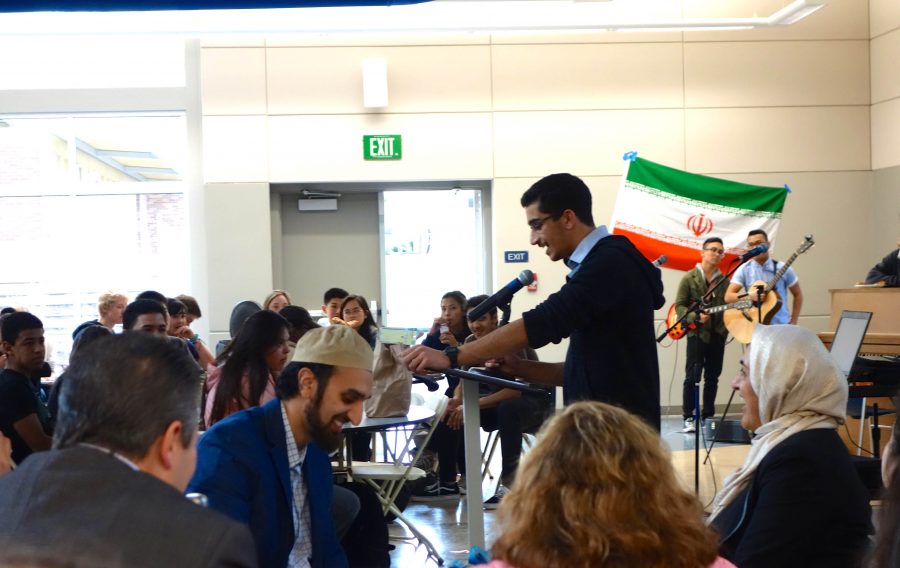 Naser Abdelrahman speaks out at the Fortifying Bridges cumulating ceremony. He was the main coordinator and the creator of the event, hoping to inspire people to reaffirm their ties and remain unified.

“Feminism,” said Sydney Pon, a senior. “Lost in stereotypes of bra-burning and man-hating, feminism has become a dirty word, instead of what it really means—a synonym for gender equality.”

Pon, the Co-President of Feminist Club, was one of the many Carlmont activists who spoke to inspire students to remain unified over the recent controversies that have created divisions in society.

After school on Feb. 3, both students and local community leaders gathered at the Student Union for the cumulating ceremony of Fortifying Bridges week to hear from various change makers.

Eighth-grader Hamza Abdelrahman, Naser Abdelrahman’s brother, said, “The purpose of this event is for people of all races and all backgrounds to come together and stop the hate that is currently being spread.”

Each club had representatives that spoke at the ceremony, in which they hoped to exemplify the diversity and constant fight for unification that Carlmont embodies.

Kyle Jung, a senior who worked behind the scenes with the sound system at the event, said, “I think it’s essential to have unity at a time where we are having issues in the American political system. It’s a really great event that Naser put on to celebrate having a sense of unity with the people around you regardless of what you look like or what you believe.”

Anyone was welcomed to attend the event, and many gathered to either stand up against the challenges that they’ve faced or support those who have been discriminated against.

“This is important to me personally because I can relate to people who have been hated against,” said Hamza Abdelrahman. “I hope this will let people know that I am not a stereotypical radical Muslim that lives out in some random desert. I am friendly, kind, loving, and caring to all people.”

“My brother is one of the main people organizing the event, so I am learning a lot from him and I’m really inspired by his initiative,” added Hamza Abdelrahman.

“Sometimes clubs create bubbles. There’s nothing wrong with creating a club, a group of people, that share something,” said Rabbi Dennis Eisner, Jewish club’s guest speaker, in his speech. “But, do more of this. Take those clubs and break down those walls. Make sure these clubs interact with each other. That’s how we are going to burst bubbles.”

Carlmont students were excited to attend the event, as shown by the full tables in the Student Union and the long paper chain that people contributed to with their own paper ring that they signed.

“It was inspiring to see so many different groups of people speak and share their viewpoints,” said sophomore Audrey Crook. “The event was very well done, and it was a great representation of the diversity at Carlmont, showing that despite the wide diversity of the school, we can all come together as one.”

Many people were thankful for the positive energy and sense of acceptance at the Fortifying Bridges ceremony that ended the interfaith week.

“Don’t stop being activists. Don’t stop doing this. There’s so much power in this room. You hear people saying now that we live in a scary time. I think we live in a hopeful time,” said Eisner. “Where’s the hope? The hope is right here.”