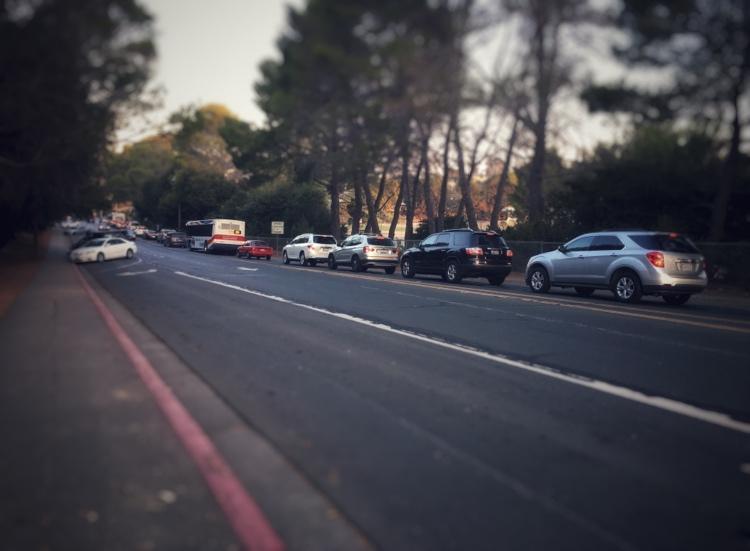 Stopped cars wait endlessly in traffic on Alameda de las Pulgas. When the surrounding schools are released for the day, cars can be stopped all the way from Carlmont Drive to Ralston Avenue.

It is no secret that driving to school in the morning is a pain. All of the stress built up from late nights and loads of studying is emphasized even more so when one is surrounded by an endless string of red brake lights.

Then, in six to seven hours, students and faculty are forced to face the perils of Alameda de las Pulgas once again.

Unless participating in an after-school sport, waiting in traffic seems like an inevitable obstacle, one that will never be overcome.

However, the Four Corners Project provides a solution.

“The Four Corners working group is made up of elected officials from Belmont, San Carlos, Sequoia Union High School District (SUHSD) and San Carlos School District (SCSD) with the support of staff from each entity,” said former mayor and current Belmont Councilman Charles Stone. “It was formed at the suggestion of then assembly member Jerry Hill to help ease traffic congestion on the Alameda de Las Pulgas Corridor.”

Originally, the four groups came together in order to put in lights on the Carlmont football field, according to San Carlos Councilman Ron Collins. After the task was completed, the project morphed into a traffic study and eventually a plan to reduce the build-up of cars accumulated during morning drop off and after school pick up from both Carlmont High School and Tierra Linda Middle School.

“[The project] started about six years ago, and maybe within a year we hired W-Trans,” Collins said.

In 2016, the company presented the working group with a 347-page study conducted on Alameda traffic flow. After much debate, option 3B was chosen for the future road improvements.

This alternative includes three roundabouts to replace the current stop signs, as well as a new entrance to Tierra Linda and a revised entrance to Carlmont. In between the two schools, there are also plans for a crosswalk and raised median.

Nonetheless, the roundabouts are truly the main solution.

“Traffic circles make traffic move more rapidly than four-way stops— they keep things smoother, they manage a safe rate of travel, they are safer for pedestrians as well as for vehicles, and they are effective during both light and heavy traffic,” said Alan Sarver, a board member on the SUHSD Board of Trustees.

However, no plan can be carried out without overcoming obstacles.

“Anytime you have separate government entities working on something together there are going to be challenges,” Stone said. “We also heard from some residents who don’t like some of the aspects of the selected alternative.”

Collins also brought up the fact that because Alameda is such a crucial area of transportation, construction crews will have a very limited window in which they can work without disturbing the entire community.

All in all, the project will cost around $5 million, the cities splitting the cost while the schools provide land. The general consensus is that the project will be completed within two to four years.

Ultimately, all four partners are satisfied with their progress so far as it is not often they get to work together on something like this. It affects not only those traveling on Alameda but the San Carlos-Belmont community as a whole.

“I’ve been very excited that the school community has been a catalyst that has really helped the cities come together and do something that’s of importance to all of the citizens that all of the organizations serve,” Sarver said.

The outlook is optimistic and the solution to daily frustration is just on the horizon. All we must do now is wait.