Smoke billows from Westgate Mall during the four day struggle

The Westgate Mall, a mall in Nairobi, Kenya, was attacked by an Islamic extremist group called al-Shabab on Sept. 21 to Sept. 24.

By the time Kenyan military and police forces had finally eliminated the attackers, more than 60 people were dead and hundreds more wounded, including some Americans.

The extremists had only one thing in mind during their raid, to destroy those that did not share their beliefs. They even went as far as to spare those that identified themselves as being Muslim.

When asked what he thought about acts of terror done in the name of religion, senior Andrew Sohrabi spoke for many other students when he said, “It’s unfortunate that some people think that their violent actions can be rightfully justified by their beliefs.”

Junior Eden Ricci similarly said, “It is wrong, and it takes away from what religion is really about and just becomes violence.”

Since so many acts of terror and mass shootings, such as the Boston Marathon bombing and Sandy Hook, took place in open, public places, students were asked if they felt in harm’s way while at malls and other crowded public places. Responses varied from sophomore Will Patterson’s, “I do feel safe as long as I have some means of self-protection,” to junior Olivia Gomez’s, “I feel totally at home in malls.”

Aside from the terror and loss of life caused by major attacks like this one, the people of Kenya have even more to lose should major terrorist activities continue in their country.  As Jeffery Genttleman of The New York Times said in an article of his own, “The billion-dollar tourism industry will crash… and thousands of Kenyans will go hungry.” 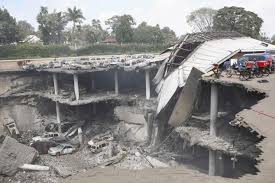 The parking garage of Westgate Mall lays in ruin after the attacksource: NY Daily News