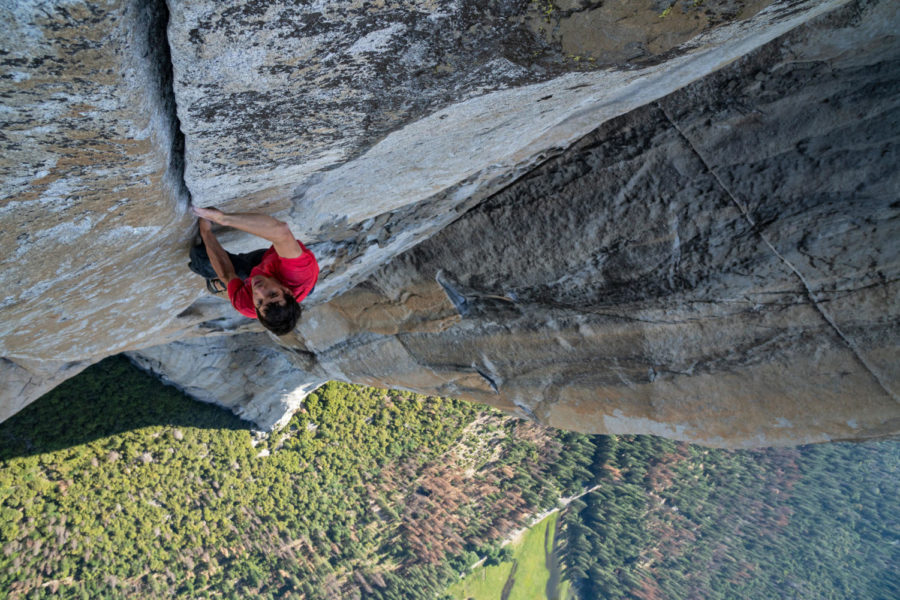 Between its stunning cinematography and nerve-wracking storyline, the movie ‘Free Solo’ takes viewers’ breath away. Not only does the documentary feature awe-inspiring camera shots of Yosemite and its climbers, but also provokes a suffocating yet thrilling sense of stress within the audience.

The audience’s anxiety is centered around the film’s main subject, Alex Honnold, and his extreme life goals. ‘Free Solo’ follows the life story of Honnold, a professional rock climber, who became the first person to free solo climb Yosemite’s El Capitan on June 3, 2017. Free soloing is a rock climbing technique through which climbers use no equipment and use only their technique and strength to get them up a route.

Standing at 7,573 feet tall, El Capitan was considered unclimbable until 1958, when it was first scaled by climbers Wayne Merry, Warren Harding, and George Whitmore. Decades later, Honnold made the wildly questionable decision to take it a step further and climb the granite wall sans rope.

The film, made by his rock-climbing buddies, follows Honnold’s quest to climb El Capitan and gives viewers an inside look at his training and motivations. The film was several years in the making and has footage from all aspects of Honnold’s life, including his girlfriend, who is arguably the most patient woman in the world while she accepts his problematic spirit of adventure.

Due to the widespread knowledge of Honnold’s ascent, the audience knows that he will succeed in his goal. However, filmmakers manage to create a sense of tension throughout the story that instills a sense of doubt about whether Honnold completes the feat, or if he even survives.

Even the cameramen expressed concerns about Honnold’s precarious situations and questioned their own involvement, as they were worried that their presence might pressure Honnold to push himself beyond his limits. Seeing the terror on professional rock climbers’ faces as they watched Honnold’s ascent highlights the true danger involved in the feat.

Some moments are only bearable to watch through the buffer of one’s fingers, like when Honnold attempts a particularly difficult mount or when another featured climber falls off the wall (with a rope, of course).

However, enduring these stress-inducing risks are worth the relief felt when Honnold reaches the top of the mountain or when he finally tells his girlfriend he loves her.

‘Free Solo’ offers a rarely seen angle of Yosemite National Park and gives viewers the chance to experience the lives of those who have made it their second home. During the film, everyday people can feel the exhilarating highs and terrifying lows of a professional rock adventurer.