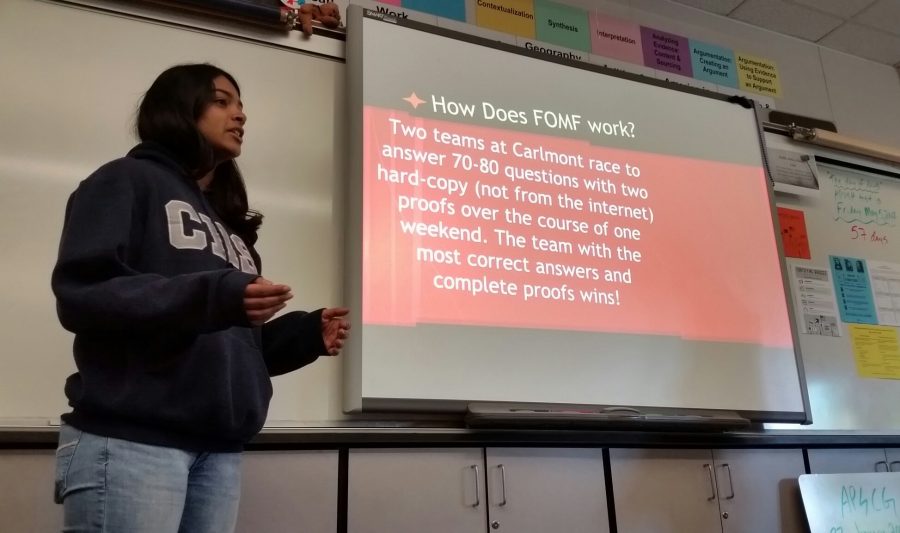 As the FOMF competition is just around the corner, Annika Nambiar introduces competition to a history class in hopes of getting the class to join the hunt. “It is important for the students to know that they have the opportunity to participate in a school activity and possibly gain extra credit points,” said Nambiar.

In less than a week, Carlmont students will be giving up their weekend and coming on campus to participate in a three-day trivia scavenger hunt.

This scavenger hunt is a competition planned by the leaders of the Carlmont Friends of Millard Fillmore (FOMF) Club, and usually includes schools from San Mateo to Santa Clara all battling for a two-foot tall trophy and bragging rights.

However, this year is different.

“This year FOMF is much more different than past years due to lack of other high school competitors,” said Sowmya Chandrasekaran, vice president of FOMF.

In order to compensate for the absence of competition from other schools, the students will be divided into teams based on their history teachers, and the sides will battle each other for the glory of winning.

According to the FOMF website, FOMF is a history-based trivia competition that exercises students’ research and problem-solving skills in an academic environment. It was originally started in 1969 by Robert Hunter, a teacher at Carlmont High School.

While participating in last years trivia hunt, students like Joanne Nie, a Carlmont sophomore, got to exercise her problem-solving skills.  The very skills that were lacking many years ago prompting Hunter to create this event.

“We actually went to a library to researched using books instead of the internet, something that we don’t do often, and it was surprisingly adventurous, ” said Nie.

This year, Nie looks forward to the researching the old-fashioned way, and learning weird, useless trivia.

In spite of the fact that this year’s competition has not yet started, FOMF leaders are already thinking ahead for next year.

“After this year’s competition, we’ll be working on outreach in an effort to get actual high school competitors for next year,” said Chandrasekaran.

Although this year the president and vice presidents are seniors, they hope to pass on their experience to the new members this year to continue this tradition. In the future, they aim for more Carlmont students to sign up and for teachers to publicize the event.

Interested students can find more information through contacting club leaders or talking to their history teachers.