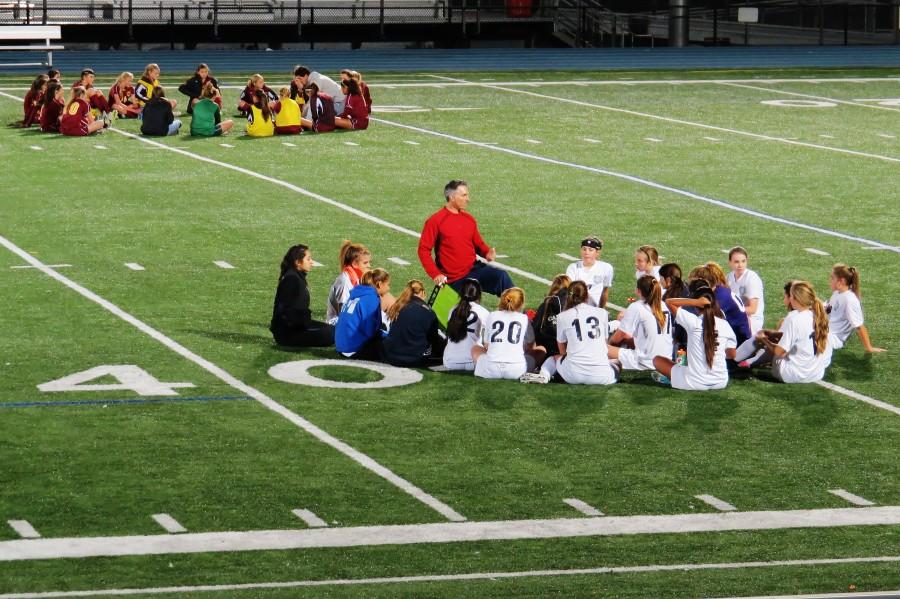 The teams meet halfway through the game to prepare for their second half of playing.

Frosh-Soph Lady Scots soccer team met Menlo Atherton Bears in a tough match up where the Lady Scots came out victorious with the score being 1-0. The Scots now have a record of three wins, two losses, and one tie.

Sophomore Kelsey Ching scored the only goal and the winning goal in the game during the first half.

Ching said, “Last year Menlo Atherton was pretty good and I thought that going into the game it would be a tough match up against the Bears.”

Sophomore Amelia Armstrong said, “Last year we played them before and I think that we won one game and lost one also. Menlo Atherton is a very good team and is hard to beat.”

The Scots showed domination of the ball throughout the game and players believe that they have improved as the season has continued. This includes working together and connecting as a team to develop the skills and build towards a winning team.

Armstrong said, “As a team I think with every game we play, we have improved and we work well together. We always like to try and dominate with possession of the ball.”

Sophomore Lauren McDonnell, captain, said, “We did well as a team and we all connected really well, we were all motivated to beat Menlo Atherton because they are a very good team.”

Armstrong said, “If we keep doing what we are doing and continue to improve we will have positive results.”

The Lady Scots did not let the Bears good record phase them as they played, knowing it would be difficult to pull through and beat them for the first time this season.

Armstrong said, “I think that next time we play them we will be more confident, but we know that both teams can improve a lot over one month so we will not expect an easy win.”