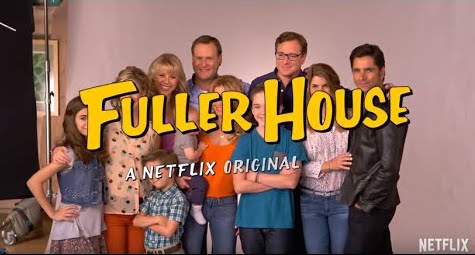 "Fuller House" continues the story line of "Full House," 29 years in the future.

The hit ABC Family TV show “Full House” is back in the form of a new Netflix original series “Fuller House,” which picks up with the characters’ lives 29 years later.

I have such fond memories of watching “Full House” as a child.

“Fuller House” is based around the character D.J. Tanner, a now single mother, who is raising her three sons with the help of her childhood best friend Kimmy and younger sister Stephanie.

The most impressive thing to me about this show’s reincarnation is how many actors returned for its first episode. The plot of the whole first season only follows three of the original characters D.J., Kimmy, and Stephanie, along with a set of new characters.

The first episode, though, features almost all of the original Tanner gang. John Stamos, Bob Saget, David Alan Coulier, and more returned to the show creating quite the family reunion.

The Olsen twins, who played baby Michelle in the original show did not return for this spin-off’s debut; however, the show made a light hearted, but sarcastic excuse for Michelle’s absence.

I was a little worried going into this show, because I did not want it to ruin the original.

I had heard from others that it was horribly done with poor acting, and put “Full House” to shame.

I blame the high expectations for this spin-off on increased quality in TV shows, acting, and technology since the original show stopped airing.

The acting is not amazing, which is expected considering the number of young children play main roles in the show, but it is like the original.

This spin-off was made for lovers of “Full House,” the references to old episodes and catch phrases are endless and entertaining to those with a good enough memory to get the joke.