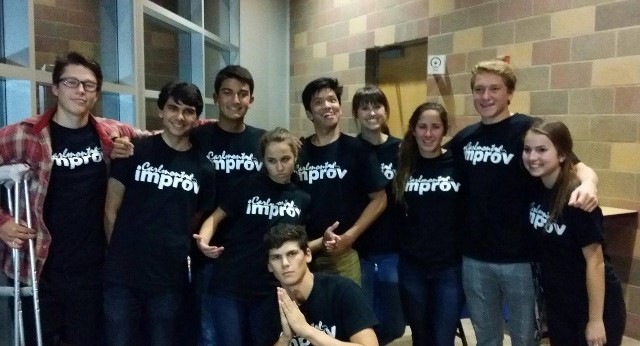 Are you funny? Do you love acting? Audition for Carlmont’s very own Improv team.

Improv, short for improvisational theater, is a form of comedic acting where performers make up the scene on the spot.

Junior Max Lieberman said, “Improv is coming up with things on the spot. We play games where we improvise sketch comedy and it’s really funny. It’s a great opportunity for me to just have fun and let loose on stage.”

Improv shows are unique, as performers directly interact with the audience in order to come up with a scene to perform.

Senior Lauren Pittock, president of the Improv team, said, “For shows, we come up with a collection of games were going to play, and then we get suggestions from the audience and create scenes on the spot based on those suggestions.”

During shows, there are three different roles that performers can take: the robot, the ninja, or the pirate. These roles are universal throughout the Improv community.

Pittock said, “A pirate is the type of person that comes into a scene and become the crazy, weird character. A ninja is an improviser that controls the scene and keeps it moving without the audience really realizing it. The robot is the straight character in the scene. You always want to have a character that contrasts the crazy character, so that the scene stays real and grounded for the audience. The robot is the normal character that reacts to the craziness of the scene.”

The Carlmont Improv team’s next show is in May.

Another upcoming event is the Improv auditions that will take place on Tuesday, April 14.

“Usually the Improv audition will start off with a simple game, and then we’ll start going on to different things. Usually we will have a member of the team and the person auditioning do a scene. We help guide the scene, but we want the auditioner to lead the scene, so that we can see what he or she is capable of,” said Lieberman. “We are looking for people who are very creative and witty, someone who thinks outside the box.”

However, making the Improv team  is no easy feat.

Sophomore Sophie Clark said, “Every audition we have around forty people come and audition. Depending on how many seniors we have leaving, that’s how many spots we have. This year we will have three spots, as we try to keep the number of members on the team at twelve to thirteen.”

Still, if you do make the Improv team, you will reap the benefits of being on this team.

Sophomore Allison Granet said, “Joining the Improv team is a great opportunity to learn a lot more about yourself, as you get to jump outside of your comfort zone. You get to be with really funny people and it’s a great experience.”