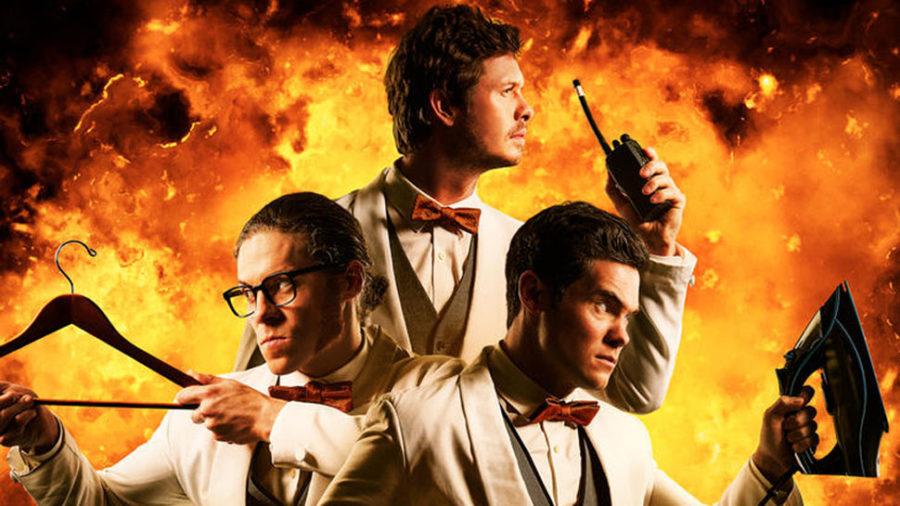 'Game Over, Man!' is a mindless movie with a poor plot and unfunny humor.

Just by the trailer, it was easy to see that ‘Game Over, Man!’ would be a joke of a movie.

A movie with weak comedy and poor entertainment, ‘Game Over, Man!’ stars Adam DeVine, Blake Anderson, and Anders Holm as the three main characters set out to stop mercenaries from killing a well-known pop star.

DeVine has played roles in ‘Workaholics’ and ‘Pitch Perfect,’ but in this film, he plays a selfish and overall not very bright hotel cleaner named Alexxx.

DeVine is accompanied by Anderson who also played a role in ‘Workaholics’ as well as ‘Dope.’ In ‘Game Over, Man!,’ he plays the role of Joel who is one of Alexxx’s best friends and is known for his ability to build things.

The last of the three is Darren, played by Holm who was also in ‘Workaholics’ as well as ‘The Intern.’ Darren is an intelligent and creative person with a small drug problem who uses his brain to try and help the three battle the men that took over their hotel.

This movie overall was quite a disappointment. The premise of the movie isn’t terrible and with the right cast, better directing, and some revisions to the plot, it could even have even been a good movie. Nevertheless, the jokes were an elementary-level of comedy and the acting by almost all the roles was done so jokingly.

The plot itself was also poorly done. Although in action movies many things are done that the viewer knows could not be performed by any human, no matter their ability, ‘Game Over, Man!’ crosses the line many times and introduces ideas so absurd, they’re almost laughable.

As the three cleaners go about their daily job and try to figure out other ways to get money, they find out that a famous pop star is going to be staying in their hotel. They decide to pitch their idea to him to see if he’d like to fund it, which he does.

As the night goes on, the supposed security guards take the pop star hostage and demand he gives up his money. The three cleaners are left to place it upon themselves to save the pop star and claim their money.

Most comedies, at least the movies that one tends to remember, have unexpected and well-thought-out jokes that fit the mood of the scene and allow for a better understanding of the characters. Instead, this movie throws around reckless jokes and immature humor that a small fraction of people would laugh at.

Ultimately, ‘Game Over, Man!’ is about as good as its name. It’s simply a movie to watch if there are no other options.