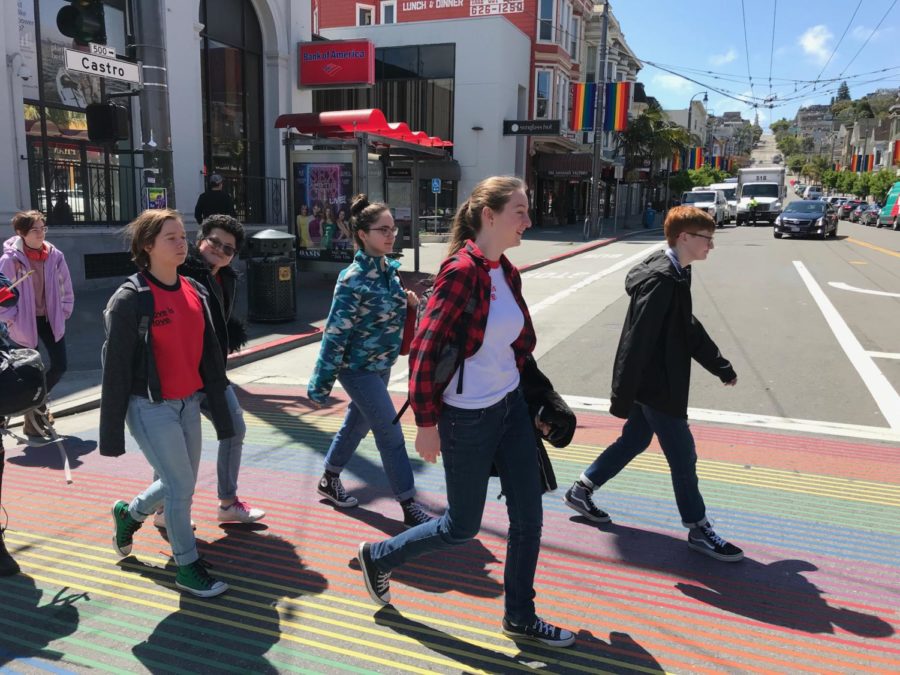 The Gender-Sexuality Alliance takes their annual field trip to the Castro District in San Francisco.

Carlmont’s Gender-Sexuality Alliance (GSA) made their annual visit to the Castro, where they learned more about the history of the gay rights movement and explored the culture of San Francisco’s LGBTQ district.

“It was really fun. We went to the GLBT museum, where we learned about some LGBTQ history. And we went on a tour of the Castro,” said Anika Marino, a freshman club member.

The GLBT museum is the only museum that solely showcases the history of LGBTQ culture in the United States and in San Francisco. Their main exhibit, “Queer Past Becomes Present,” shows the history of queer people in the Bay Area, dating back to the time of the Spanish explorers. Other exhibits that are open at this time include “SoMa Nights: The Queer Nightclub Photography of Melissa Hawkins,” which focuses on the work of journalist Melissa Hawkins during the height of the AIDS crisis, and “The Mayor of Fulsom Street: The Life and Legacy of Alan Selby,” which tells the story of the founder of Mr. S Leather, an emporium that is a symbol of the leather and kink culture in the South of Market (SoMa) district in San Francisco.

GSA also took a tour of the Castro, to learn about the history of the gay rights movement within the district. The tour focused on the history of San Francisco and its connection to the queer community. Some notable sights on the tour include the Harvey Milk Plaza, dedicated to one of the most famous gay rights activists, the Lavender Youth Recreation and Information Center, which strives to create more leadership and career opportunities for LGBTQ youth, and the GLBT Museum.

One of GSA’s final stops was Hot Cookie, a local bakery that supports LGBTQ organizations in San Francisco. The bakery is known for its adult novelty cookies and its acceptive atmosphere. It has been an icon in the Castro since its creation in 1997.

Andrew Ramroth, the faculty advisor for the club, was excited to take the students on such an important trip, to teach them more about the queer culture in their local community.

“I’m hoping that the students will learn a lot of about the history of the gay rights movement, and also see the resources they have so close in San Francisco, where there is a community that is really trying to embrace LGBTQ culture. It’s been a pretty kind of remarkable, unique spot in America, and it’s so close to us. I want them to know that they have access to that really cool community and to a lot of knowledge and history,” Ramroth said.

The students were also very excited to learn more about the history that isn’t always taught in history classes.

“I think it was really fun. And it was really informative. I learned a lot about the history that’s not included in textbooks, a lot of stuff that’s never mentioned,” Marino said.

Another club member, Madeline Boyle, said, “I really liked it a lot.  It was one of my favorite field trips that I’ve ever been on.”

GSA also has many other activities throughout the school year. One of the first activities they planned this year was Ally Week, which happened in late September. According to GLSEN, a national group focused on promoting safer schools for LGBTQ youth, the week is “a student-led program where LGBTQ K-12 students and LGBTQ educators lead the conversation on what they need from their allies in school.”

“During Ally Week, we tried to engage allies more in the community, we had a pledge to sign to show how they can support LGBT people. We sold shirts then, and it was kind of just about creating more awareness,” said Sophia Krackov, vice president of the club.

Another event they promoted was Day of Silence. According to GLSEN, this national event occurs on April 12, where students refuse to speak to highlight the silencing of LGBTQ people in school.

“It’s a day where you don’t speak when you are not needed to, like outside of classrooms or workspace, to raise awareness about the silence of LGBTQ teens who can’t speak up for themselves,” Marino said.

This year, GSA also collaborated with Teen Talk, the youth health education program that is an integral part of the Life Skills course at Carlmont.

“We talked to the Teen Talk people about incorporating more LGBTQ awareness in its programming. They actually came to our classroom and they had a document where they put our ideas. I think they did change their curriculum to be more LGBTQ-friendly,” Marino said.

GSA also works with the San Mateo Pride Center, to learn about how they provide additional resources to queer students.

“We work with the San Mateo Pride Center a lot of the time. For instance, we have one of the representatives, Gilbert, come in every year and talk with us about how we can be better activists,” Krackov said.

In addition to their partnership with the Pride Center, the club also promotes other activities at the pride center, to offer more resources to LGBTQ students.

“I haven’t been there personally, just because it’s a bit of a drive, for me, but I know that it does provide a lot of services for LGBTQ students. For example, they’re providing information about voice therapy for trans students. They are a great resource to LGBTQ students, which can really help them. We partner with them a little bit.  I want to partner with them more in the future. Really, they’re lovely people,” Krackov said.

The club is very excited to continue their work creating a welcoming space for LGBTQ youth in Carlmont. However, they also want to expand their message and make the club more mainstream within the Carlmont community.

“We want to keep growing, definitely, and trying to appeal to more people. We tend to lose membership as the year goes on because it’s easy to sign up for a club, but hard to commit to it. So I want more committed members involved in the club. I also want to increase our presence on campus, like, for instance, do more advertising around Day of Silence and do something for Valentine’s Day, next year,” said Krackov.

But, GSA intends to keep its original goal of creating a safe space for all, especially LGBTQ students and allies.

“I joined because I wanted to connect with other LGBTQ students. I’ve never really felt like I have a place to connect with people, before then. It is a big safe space for me where I could feel like I could be myself without having to censor who I am,” Krackov said.